In my last two articles I talked about where the Modern AGE line currently stands with its core, setting-agnostic books, used to customize the game as you please, and its published settings, from sketches to two full-blown game settings: The World of Lazarus and Threefold. However, I ran long on the second article and didn’t have a chance to talk about the adventures we have—and that’s what this one is for. 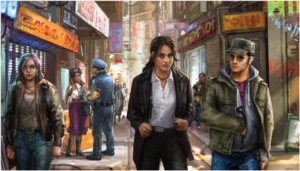 Two Versions of the Quickstart 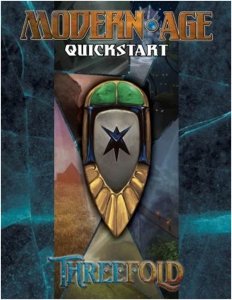 One weird thing that happened during Modern AGE line development is that we ended up with two quickstarts.

Original Quickstart (Burning Bright): Back in 2018, Modern AGE’s quickstart included an adventure about going to another dimension, Tannebrim. To inform you anew or refresh your memory, a “quickstart” contains cut down rules, pre-made characters, and an adventure to run them through, so you can get a taste of what the full game is like.

Expanded Threefold Quickstart (Burning Brighter): Fast forward a year, to when the Threefold game setting was on the cusp of release, and we wanted to participate in Free RPG Day. Well, Threefold was one of the inspirations for the original quickstart adventure anyway, so we produced an expanded, updated version with additional content and pregenerated characters that were fully integrated with the Threefold setting. We made that available in print for Free RPG Day, but you can still get it for free electronically.

Both versions are still available for download, but be aware that the latter version, with the adventure “Burning Brighter,” is an expansion of the original and its adventure, “Burning Bright.” You’ll have to run one or the other in any given campaign.

Backs of the Books

The Modern AGE Basic Rulebook comes with an adventure called “A Speculative Venture,” about bad things happening at a fancy party…and special options to let the Game Master decide what the central secrets of the adventure really are, to make it work with as wide a range of published or homebrew settings as possible. It’s for Level 1 characters.

Both setting books also include adventures for new characters, though these don’t have a choose-your-own premise option.

The World of Lazarus scenario “Taking the Stone,” is firmly set during the rule of the families, decades after Year X, but can be adjusted based on which of the setting’s campaign models you employ—and whether you’re a serf or one of the elite.

Threefold’s included adventure, “Identity,” takes characters across multiple planes of existence to deal with transdimensional political intrigue, bound in the question of what it means to have a soul. 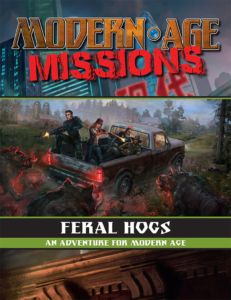 The Modern AGE Missions series presents a variety of adventures, some of which might appear in any modern setting, and some of which are more specific. These adventures are not necessarily connected, and can be dropped into your game, or used as the anchor for a campaign if you expand them. The first two were developed by me, while the rest come courtesy of Meghan Fitzgerald.

Warflower: Sudden, strange violence at an auction leads to the disappearance of a late medieval book on warfare and alchemy. Who took the Warflower, and why? And who gets killed with a sword nowadays? Like “A Speculative Venture,” Warflower lets the GM choose the ultimate secret behind it all. For characters levels 1 to 4.

Feral Hogs: A pop-culture infused apocalyptic ATV-riding, meshback-wearing fever dream. The end came with mutagenic chemicals, abundant energy drinks, pyramids of cardboard boxes, and of course, 30-50 mutant feral hogs, running into your yard. And what will you do when they come? Huh? HUH? For characters levels 1 to 4.

Flight 1701: A routine flight turns into humanity’s first contact with extraterrestrial life—and first trip to an alien biosphere. The passengers and crew must work together to discover what happened, communicate with an alien species, and figure out a way to get back home. The decisions they make may alter the course of human civilization forever—and like Warflower, its central secrets are up to the GM. For characters levels 5 to 8.

Assault on the Aerie: A skilled strike team must find a way to breach the defenses of a nigh-impenetrable mountain fortress, rescue the hostages inside, stop a threat to humanity, and get out alive. That alone would be hard enough, but the mystical wards and magical creatures standing in their way makes the mission all the more dangerous. Assault on the Aerie is designed to be suitable for characters between levels 13-15, showcasing Modern AGE in the urban fantasy genre. It provides multiple paths for the Game Master to follow, allowing it to stand on its own or fit into a larger campaign.

We’re expecting at least one more Modern AGE Missions adventure. Beyond that, we have the Five & Infinity adventure series for the Threefold setting. We’ve presented the individual adventures before, but at Gen Con we’ll be premiering the collected series alongside special tools to generate stories and even planes of existence. I’ll talk about that another time. If you’re headed to Gen Con, check it and the rest of Modern AGE out at Booth 101. 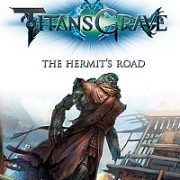 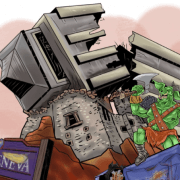