“What do characters do, exactly?” To be honest, I have always had mixed feelings about the core story concept in roleplaying games. Many new games are a tad narrow in focus, with excessively defined goals, at least for my tastes, especially when one of the things I love about RPGs are their looser objectives. Threefold fits this ethos in that the setting is enormous, but it presents a bunch of different story levers to pull. It has a few key themes, but you’re supposed to develop your own reactions to them. The book is a conversation we’re having with you, not a set of dictums.

(What is Threefold? Do try to keep up—it’s the new setting for Modern AGE, coming this Gen Con!) 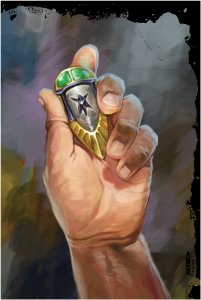 Scarabs can be willed to change size. This one (a Searcher branch scarab) is small for easy or clandestine handling.

However, you have to start somewhere, so Threefold focuses on characters who belong to two factions: The Sodality and Aethon. The Sodality is the bigger partner, so I’ll start with it, and how it focuses characters on certain types of stories.

Ex infinito, intelligentia (“From infinity, intelligence”) is the Latin translation of the Sodality’s motto, rendered in formal Shabda and often perceived as Latin by those who know both it and the all-language. An agency of the Vitane’s interplanar democracy, it engages in exploration, understanding, diplomacy, and—when necessary—intervention, hoping to improve the fortunes of all soul-bearing beings. Its goals are described as “security, sovereignty, and sapience.”

Missions make up the core of the Sodality. These are small, dedicated teams of three to six Sodalts (as they’re called, individually) and allies who are given a general mandate to interpret as they see fit within the bounds of the Vows, and specific orders when required. The Sodality prefers to staff Missions with at least one Sodalt from each branch, though this is not always possible. The three branches parallel the organization’s goals.

Tools of the Sodality

A Sodalt’s signature accoutrement is their scarab. This gem and metal badge identifies the wearer as a member of the organization, with colors indicating division: amethyst and gold for Emissaries, garnet and silver for Protectors, and emerald and bronze for Searchers. Beyond acting as identification, a scarab has several magical functions. It acts as a communications device, stores magical energy (important on Earth, where kanna, the power of magic, is hard to recharge), sheds light, and provides some protection from the elements.

A complimentary standard issue item, the Shabda Plaque, is a white sheet of stone that says “THE BEARER IS AUTHORIZED” or something similar in Shabda, the universal language. This carries an enchantment where weak and average wills see the proper credentials to enter crime scenes, back rooms, or do anything required, though it doesn’t work on better-trained individuals.

Missions use these and other assigned tools on a variety of operations. They explore the planes, negotiate treaties, keep the peace, and above all, adhere to the Vows, an internal code of honor that, despite disparagement from their enemies, mostly functions to keep the Sodality focused on keeping the peace. Next time around, I’ll talk about the Sodality’s organization some more, from supervising Magisters to itinerant Wardens. Until then, trust in the scarab. The person wearing one is thinking of your best interests.