So, this is the capstone on the Orktoberfest series, where I went over some of the notable elements of Ork!: The Roleplaying Game, Second Edition. Subtlety is not especially orky, so I’ll lay it out: This was to make you interested in it, so you would buy it. Krom, god of the orks, is a cruel cosmic overlord, but he’s honest! Therefore, I’m going to end things by making a “stone staircase pitch” (elevators are rare in the World of Orkness; anyone capable of building or maintaining one would probably be eaten by a troll). 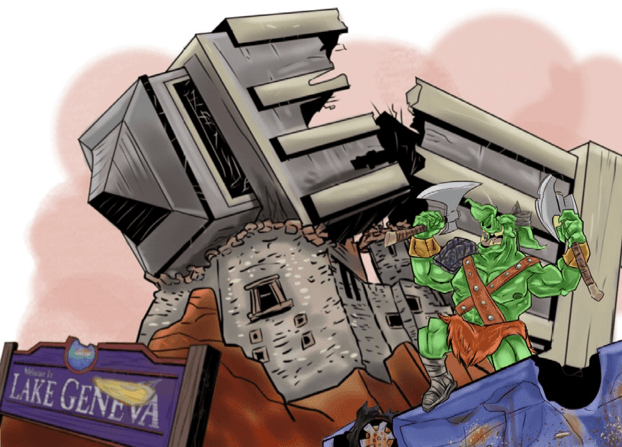 Enter the World of Orkness!

Why You Am Buy Ork?

Why You Am Have “You Am” Sentence Constructions?

Okay, I keep forgetting to put this down in various blog articles. Part of Ork!’s fun is talking like an ork! Orks live in an eternal present, like stereotypical enlightened masters or excitable mastiffs chasing cars, so always use the present tense, with emphasis, because the word “am” usually precedes verbs and adjectives. “Am” also replaces “do,” “be,” “is,” and a bunch of other weak, worthless words. Orks use “me” instead of “I,” and frequently reject stupid dithering definitive articles, and generally employ Hemingway-eqsue economy of speech. Me am tell you good? You am get ork points for good ork talk!

I never bothered to get into the setting before, either! Orks live in a place called the World of Orkness, because we don’t pass up cheap jokes around these parts. In development, we got rid of a bunch of stuff detailing specific areas because orks have terrible memories and if they mostly have a geography divided into their village and a fluid, enemy-filled not-village, this frees Orkmasters from the burden of consistency. However, the World of Orkness has a basic set of stuff in it, including:

That’s it for Orktoberfest (at least for this year! Heh.). All that’s left is for you to buy Ork! However, that’s not all! Coming up next year, the Orkmaster Mayhem Kit will give you a screen and new adventures.

Furthermore, after experimenting with Ork!’s system a bit, I decided to see how it would work for a more serious rules-light game. I can’t say much about it now, but the wheels are turning. Watch this space!