One of the new things about Ork! The Roleplaying Game, Second Edition is the role of magic. Ork!’s mastermind, Todd Miller, requested that this edition include better rules for magic. Previously, magic was mostly left to the Orkmaster, who used it as an excuse to have village warlocks (then called shamans—we changed the terminology to something less problematic for the new edition) relentlessly bully players’ orks. In those rules, warlocks could do anything, and orks just had to suck it up! Plus, there were some magic trinkets available. 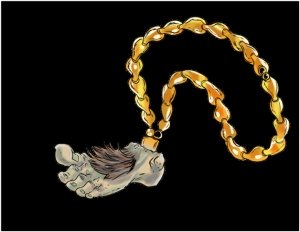 Not everyone benefits from “material components”

Go Ahead and Try! Heh, Heh.

The new edition has really taken it to the next level. Does this mean a new limit on the warlock’s ork-oppressing mystic might? Nope! Warlocks can still do whatever the Orkmaster thinks they can. This is because Krom, the fearsome god of the orks, trusts warlocks enough to let them reshape the cosmic energy he left around. What’s new is that now, any ork can try to cast spells by following a few simple steps and making a Magic roll.

As you might guess, orks aren’t the most studious creatures around, even if a place with the words “hog” and “wort” in it sounds like somewhere orks should go, to admire architecture, eat centaurs, and possibly vape something called a “huff-a-puff,” which for litigation related reasons I may be misremembering the name for. So, all ork magic is improvised. The prospective spell-ork needs ingredients, such as something he must do, a place he must cast at, or an item he needs to have. The number of ingredients is one per rank of the spell, going from Minor to Moderate and Major. Describe what the spell does, let the Orkmaster assign its rank get the right ingredients for it, and roll some dice!

There’s just one problem: Krom does not trust orks with magic. While Krom vomited up the whole universe, not all of it is under his complete control. (Even whispering this is blasphemy, and a warlock will turn you into a pine cone for mentioning it!) Magic’s the errant lint, dust, goo, and forgotten crowdfunding rewards which clutter up the cosmos. Krom’s too busy tormenting orks and looking impressive to clean it all up, but he doesn’t want orks rummaging through it either. Thus, when an ork tries to use magic, he suffers Krom’s Curse! Manifestations of the curse rage from growing an unwanted beard to being crushed by an enormous foot green foot tattooed with the cryptic rune, ™. The more powerful the spell, the bigger the curse, and failed spellcasting rolls get the worst curses of all! Fortunately, ork points can be used to partially reduce the effects of Krom’s Curse.

As noted, warlocks can still do whatever they want. Warlocks aren’t subject to Krom’s Curse because they’re loyal and have been taught Things Most Orks Are Am Not Meant to Know. The Orkmaster decided what they can and can’t do, though some things, like making magic items, is a special warlock ability, not available to spell-slinging common orks. Plus, other beings—disgusting non-orks!—seem to be able to make items, and even use magic without drawing Krom’s Curse. Orks don’t know what this is. Could it be the human god, Cromus, who of course has nothing to do with Krom, so shut up, making a different deal with his people? Who knows?

On the topic of magic items, Ork! has plenty of them, from the magic tattoo of the Iron Bird to autogyros and dread magic spears. Activating some of these items also requires a Magic roll, and sometimes draws Krom’s Curse, but this is milder and less frequent, in exchange for potent but limited benefits—and the constant risk another ork will hit the owner over the head and take it. Items are daily (meaning they can be used a listed number of times per day), munchies (they get used up, like cookies and your good friend’s beers), futzy (these work every 2d4 hours) and always (lo and behold, these work all the time!).

This short staff is carved with strange warlocky symbols and has mojo written all over it. It can be used as a club with a damage rating of 1, but that’s not its main function. No, the grovel stick is not an ordinary weapon of war. It reminds upstart orks who the boss is. The fact that its ability also works on squishy and sour men is a big plus. If the wielder of the grovel stick hits an opponent in hand-to-hand combat, he can choose to activate the magic rather than inflict damage. If the magic works, the victim falls to the ground and grovels uncontrollably for 1d4 rounds. Even if attacked, the victim continues to grovel. Never mind that orks can’t understand squishy men; groveling transcends language.

Ork!: The Roleplaying Game is shipping now! Next week we’ll be in November, and I’ll put a capstone on this series, giving you a full rundown of the contents. Happy Halloween—it’s an ork-worthy affair!