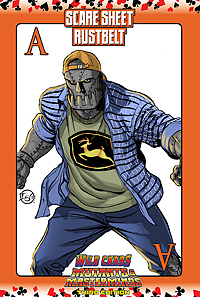 “Rusty” (as his friends call him) is the nicest guy with steel skin that you’re likely to meet, like a bulldozer with the heart and manners of a farm-boy. Not only is he as strong and tough as you’d expect from a guy covered in metal plates, but his touch can rapidly rust and corrode. He just has to be careful not to suffer the same fate. (For Mutants & Masterminds Third Edition.)

Today we present the final four heroes from our First Appearance level backers from the Deluxe Hero’s Handbook Kickstarter campaign.

In First Appearance #4 we have TitanPrime from the mind of Scott Kunian. A cosmic-powered hero with his origins in Nazi Germany. And, from Jonathan French, we have U.S. Ape! Really, it doesn’t get any better than a marine transformed into a super-powered gorilla who fights the Axis!

In First Appearance #5, we get to see the final two heroes from our backers. This PDF features Velocity Raptor from Kyle Rivest, one of the people behind the M&M-flavored Punching for Justice Podcast. Velocity Raptor is just your average, ordinary dinosaur that’s been captured by aliens, uplifted, and escaped to become a member of a cosmic superteam! And, from Erik Menard and P. Michael Hodge, we have Virago! A legacy superhero who’s inherited powers from her WWII-era superhero grandparents!

Thanks to all the First Appearance backers and we hope you’ve enjoyed seeing their creations. It was great working with them on this project and we’re happy to be able to feature them here on our site.

Adventure design is a funny thing. Published adventures need to appeal to the widest possible group of PCs. Whether the PCs are bandits, knights, businessmen, or criminals an adventure included in a publication needs to do the best job they can to motivate and include those characters in the action. This is why published adventures based around classic plots like the Seven Samurai/Magnificent Seven are a good model; anyone who needs money, is a halfway decent person, or has some useful skills can be hired to defend a village from bandits or monsters.

Designing adventures for a particular group is a different beast. You can tailor an adventure to the PCs you actually have, not those you might have. This allows GMs to populate the adventure and the setting with plots, characters, and twists that speak directly to the PCs, their motivations, and skills. I call this the Silverado Effect, from the Lawrence Kasdan western film of the same name.

In Silverado, four "PCs" find themselves on the wrong side of some bad people. One of them used to ride with the main bad guy, now a corrupt sheriff and boss of the town of Silverado. Now he seeks some peace but still ends up coming against his old "friends." Two other characters, brothers, find themselves the target of the evil sheriff’s business partner, the son of a robber baron the eldest son killed to save his kid brother. They come into town to see their sister, and end up getting revenge when the bad guys take a run at their family. The final character arrives in town to find his father beset by the sheriff and robber baron who want their land and that his sister has abandoned the homestead to work as a saloon girl. Throughout the film these four characters alternate between friendship and suspicion until they finally come together to take on the bad guys and clean up the town.

It’s a great film and a classic of the modern western, but perhaps more importantly for the topic at hand it’s a story that only works with those characters. You can’t throw in a different main character without changing the whole dynamic. That’s because every bad guy, sympathetic character, and event is designed to motivate those characters in ways that wouldn’t work on someone else the same.

Have a PC whose parents were killed by bandits? Put in a bandit chief antagonist. Another PC loves kids? Add a needy waif who will meet a bad end without their help. Another is a politician and schemer? Then maybe the bandit chief is working with a corrupt lord or worse, maybe the lord hires the chief and his men as his personal magistrates to help him execute a complex scheme. By making these adjustments, you can even tailor a published adventure to your group and make it a very personal affair for the PCs.

This is the great advantage of designing adventures directly for your gaming table and while it can be some work, it can lead to truly fantastic games. It might not always be easy, but it is often worth it.

First on the docket is Ruadàn from Charlie McElvey, the mastermind behind Xion Studios, the Watchguard Sorcebook, and more. Ruadàn is heir to the mythical sword Fragarach and with it commands the wind with godlike power. And, from Tymm Brown, we have Samson! A legacy hero and former professional wrestler who’s grown to become one of the most powerful heroes of his generation!

Today’s characters for the Kickstarter backers who supported us at the First Appearance level are definitely unique!

And, from Michael Schell, we have Ogre Bear! A professional wrestler-turned super hero! Anthropomorphic heroes, here we come! 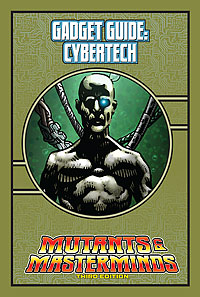 The concept of prosthetic limbs or replacing parts of the body with machines has been around since mythic heroes with arms of finely crafted silver and the like. Modern technology has made the idea of "cybernetic organisms" (cyborgs or even just borgs for short) even more common, with entire sub-genres of fiction—cyberpunk, and later posthumanist—devoted to human enhancement and "upgrades." This Gadget Guide looks at the concept of cyberware and how it works in M&M game terms.

As part of the Kickstarter for the Deluxe Hero’s Handbook, we created ten slots for a level named "First Appearance." For signing on at that level, each of the backers was able to send us a character which we’d post online to show off to the M&M-loving public. All ten slots sold and this week we’re going to present the characters, two per day*, as PDFs for you to download and enjoy.

Each character includes their game stats along with history, personality, powers and abilities, and a logo created specially for them by 1st edition M&M graphic designer Sean Glenn!

So, come back every day this week for two new, free characters submitted by some of our fantastic fans.

* Or maybe four, depending on the day. It’s the new math.

… and that most certainly includes those of us working in publishing. "Mistakes happne," as they say. To err is human, etc., etc. As much as we try to put out flawless products free of the stain of human fallibility… well, we’re human.

END_OF_DOCUMENT_TOKEN_TO_BE_REPLACED 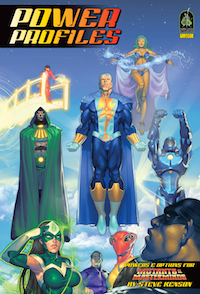 Power Profiles for Mutants & Masterminds is now available for pre-ordering from our Green Ronin Online Store!

When you pre-order the Power Profiles hardback book through our Green Ronin Online Store, we’ll offer you the PDF version for just $5, and you can download it today! This offer is also available through participating GR Pre-Order Plus retailers.

Power Profiles includes new power options, extras, flaws, and variants to modify the basic power effects from the Hero’s Handbook, so you can create the powers you want. More than just powers, each profile also covers complications associated with those powers, to give your characters added depth and to help you earn hero points in play.

Power Profiles refines and greatly expands the power options from Mutants & Masterminds, taking its basic effects and turning them into a wealth of options you can choose from. With this book, there’s no limit to your power!

For a limited time (as in, offer expires next Friday, July 26) you can order the PDF for just $12.50 through our online store. After that, it goes back up to the regular price of $20. we know that a lot of you already have these Power Profiles through our weekly PDF sales from 2012, so we want to give you some love back with a bit of a discount for those who don’t want the Pre-Order Plus deal. 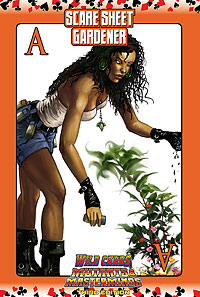 Jerusha Carter can make seeds sprout right before your eyes, growing in an instant into full-sized plants, from vines and hedges to giant trees. She can replenish a forest or help restore depleted wetlands, but don’t get her mad, unless you want a full grown tree sprouted in mid-air dropped on you! (For Mutants & Masterminds Third Edition.)