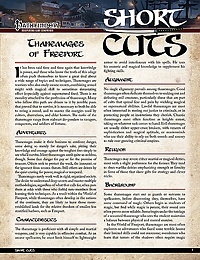 Today we resume our Short Cuts series of Pathfinder-compatible PDFs. These are tightly-focused PDF products that look at a single topic relevant to the Pathfinder Roleplaying Game. All Short Cuts are appropriate for use with Freeport: The City of Adventure, but can also be easily used in any Pathfinder RPG-compatible campaign setting.

Short Cuts: Thanemages of Freeport is a 7-page pdf that presents a new base class designed to operate in Freeport, but appropriate for use in any Pathfinder Roleplaying Game-compatible campaign setting. Thanemages are warriors who also study arcane secrets, combining armed might with magical skill to sometimes devastating effect (especially against supernatural foes). They are combatants first and foremost, but have learned that against some foes magic is the only effective weapon. This flexible approach applies both to their spellcasting (requiring them to prepare spells in advance, but allowing them to choose from among all their prepared spells when deciding what to actually cast), and the supernatural powers they learn to turn against horrifying eldritch foes.

Get the Pathfinder Short Cuts: Thanemages of Freeport PDF today for just $2.95!