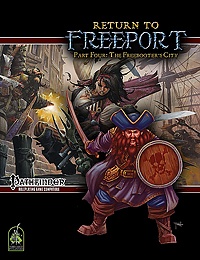 Part Four: The Freebooter’s City
In Return to Freeport, Part Four, the adventurers sail back to Freeport and find themselves embroiled in a different kind of battle, even more dangerous than they are used to: pirate politics.

You can buy The Freebooter’s City in our Green Ronin Online Store.