Modern AGE is currently undergoing final touches before the advance PDF and preorders start, so this Modern Monday’s going to be a short one talking about genres, modes and the reason we give them special emphasis.

Dungeons and Dragons invented its own genre. Yes, it grabbed elements from numerous sources in fantasy fiction and medieval wargames, but its peculiar history mixed those up in a distinct fashion. Over the next 44 years, other games added new elements to the mix, reacted to the curious construction of “dungeon fantasy.” Writers, producers and game developers brought it into new media, adding their own sensibilities and practical insights—and then roleplaying games brought that expanded melange back. At this point, we have a very broad but definite idea of what a classic fantasy RPG looks like. It’s got elves, magic, a team of heroes, high adventure. You can introduce significant variation (and Fantasy AGE does this well—look at Titansgrave!) but there’s always a core experience to refer to and design around.

Modern games never started out with their own mixed-up new genre. The first RPG covering anything like what Modern AGE covers was Boot Hill, and it wasn’t a generalized industrial-age RPG, but a Western game. Unless you go with a full-on alternate universe, a modern era game must deal with the concrete history of the industrial era and beyond, and the fiction found within it: action-adventure, horror, urban fantasy, spy stories and so on. Thus, a game like Modern AGE needs tools you can use to customize it for your campaign’s chosen genre.

The front line for customization is game mode: Modern AGE’s Gritty, Pulpy and Cinematic rules variants. These primarily affect how physically resilient a character is, but occasionally foray into other areas. For example, the Cinematic option for Resources (wealth in the game) allow for a steady increase as your character advances. They can move on up to international intrigue and prodigious expense accounts without too much trouble. Note that modes are packages of options, and you can always fine tune rules within a mode.

One of the reasons the modes exist is to give you access to rules which fit your selected genre. The Game Master section of Modern AGE presents several genres—folk horror, conspiracy thrillers and more—with their suggested modes. 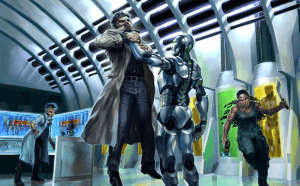 Beyond modes, Modern AGE includes a few different optional game systems for elements particular to certain genres. The most notable of these are the rules for magic and psychic powers. Both power sets have similar default systems, but rules options let you customize these to fit your campaign. Brief notes for other powers can be found in the game’s coverage of genres. Finally, the Game Master can decide all characters have access to the power of Conviction, a game system which rewards emotionally resonant, dramatic play. First found in Blue Rose, Conviction is presented as an optional system in Modern AGE.

Beyond powers, chases, breaching tests and other secondary systems exist to support the genres in which they appear. Breaching tests are for capers “where a plan comes together,” and chases are a mainstay of action media. Modern AGE even provides some support for the sorts of movies where, against all common sense, people catch up with cars on foot—but that’s Cinematic mode, applied to the chase rules.

Coming next year, the Modern AGE Companion (currently text-complete, and in editing) digs deep into genre. It includes coverage on how to make characters for particular genres, and special rules covering the mainstays of many types of fiction. That means rules for fear and horror, duels and complex martial arts styles, gadgets and extraordinary powers, and more. We didn’t take anything vital out of Modern AGE (and in fact we migrated breaching from World of Lazarus into the core game because Crystal Frasier’s rules just cried out to be core material!) but the Companion opens the next level of customization. I look forward to sharing more with you, when the time comes.