Today, we’re going to start a series that shows this off a little. The Fantasy AGE Bestiary is an excellent book full of great monsters, horrors, and adversaries for your Fantasy AGE heroes. But its utility isn’t limited to Fantasy AGE campaigns – we’re going to talk a little about how these monsters might fit into the romantic fantasy setting of Blue Rose.

This is the first of three articles taking these critters, one at a time, and discussing where they might fit into Blue Rose’s setting, and what (if any) mechanical adjustments need to be made to make room for them.

Afanc: Large, hungry beasts that haunt the icy bodies of water in the Ice-Binder, Bitterfang, and Golgan mountain ranges, they are the reason many mountaineers in the high mountains of Aldea prefer to take their water from run-offs and shallow bodies of water. Blackwater Lake in Kern was home to a small cluster of these things, the results of breeding projects by the old Lich King. No one has seen them in a while.

Ahool: Legends of merchants who’ve traveled to Wyss sometimes speak of the diminutive bat-folk of those deep, dark forests. Of course, many people say many things about those lands, and Wyssan citizens are rarely willing to admit whether or not they actually exist. 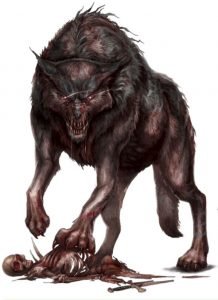 Amarok: According to some old legends, in the days when the Light was dim in Aldea, the Exarch Yungo snatched into his power a mighty wolf of the Pavin Weald in the early moments of his Awakening, and corrupted it somehow. Instead of Awakening to psychic awareness and sapience, Yungo invested only his greedy hunger and ravenous nature into the place where that spark of Light normally resides, and that wolf, whose name was Amarok, became bloated and gluttonous, the first of its kind.

Bakwanee: Sometimes, the essence of Shadow-tainted locations settles into the simplest of life forms that live there, and warps them. This has happened to both the bloodsucking fireflies of the Veran Marsh, as well as the storm beetles of the Shadow Barrens, which hide beneath the ground, save in storms, when they emerge to harvest the ambient static in the air, sparking on their metallic carapaces. From these two frightening but largely harmless insects bakwanee have risen in great swarms, occasionally growing in number until they rush out of the Barrens or Marsh, ravening across the countryside until they are put down.

Basilisk: One of the many creations of the Sorcerer Kings, the basilisk can now be found in marshlands and rivers, as well as deep subterranean places.

Bouda: Wicked shapeshifters hidden among the often sedate packs of hyenas that can be sometimes found in the souther Rezean Plains, the Rezean witches say that the bouda were taught to envy two-legged folk their forms by a darkfiend in service to Ulasta the Green Flame, sharpening until they rose to walk as men did, so long as the bouda feast on their flesh frequently.

Burrower: These massive worms are all but extinct in lands that are even nominally settled. But some of them still haunt wild lands. In particular, the stinger-tail burrowers can sometimes be found in the wilds of Rezea, quickly bursting forth when they detect the ground-thunder of Rezean herds. The bellowing burrowers can be found in the Golgan Badlands, particularly in the foothills where the mountains above echo with their ferocious roars.

Carnivorous Plants: Any place where Shadow comes to rest among natural plant life can give rise to carnivorous plants, particularly if that contagion remains there for more than a single cycle of the seasons. Shadow-tainted wastes aren’t the only locations where this is true: a sorcerer’s glade where she performs her corrupt workings, a garden at the foot of a tower that houses an ancient artifact of the Sorcerer Kings, and even the lands surrounding the lair of a powerful darkfiend or semi-dormant Shadowgate.

Charnel Knight: It is said that when certain Knights of the Skull served the Lich King well, not even death ended their service to Kern. The exact rites responsible for this transformation are not publicly known, even among the Shadowed Seven. No new charnel knights have risen among the Knights of the Skull since the Lich King’s defeat, so it may be that the undead tyrant too that lore – like so much other – with him to his destruction.

Djinn: Elementals are natural intelligences given bodies of the elements. The djinn are a whole thing else. Though almost never seen today, djinn are elemental intelligences of elsewhere, alien entities whose awareness is snatched from those far off places that birthed them, and given elemental bodies and bound by potent magics beyond the scope of the simple Spirit Summoning arcanum. Give Djinn the Shaping arcanum appropriate to their elemental nature, and remove the Spellpower and Magic Points from their entry.

Eldritch Crown: It is said that the Vizier of Eyes, a notorious shadow adept of the Sorcerer Kings realm created these, through a hideous pact with a darkfiend that fancied itself a jeweler, save that it used mortals’ eyes in place of gems. The Vizier of Eyes sought to control some of the vainest of the Sorcerer Kings and it worked to some extent. Unfortunately, the adept could not control these creatures, and they escaped him, and the darkfiend made a perfectly fetching necklace of the Vizier’s own eyes.

Fire Ogre: Potent fire elementals of terrible power and fury, fire ogres are rarely summoned. Unlike elementals, when fire ogres return to the fiery recesses of the deepest depths, they do not forget what they experienced in the bright world above. Their destruction and their subjugation to the will of adepts both infuriate them, and they wait eagerly to turn that rage into destruction upon their return to the world again.