It seemed like 2020 lasted for a decade but at last we are here in 2021. As is traditional, I’m going to tell you about some of our plans for the coming year. What is not traditional is that a global pandemic still rages and even with the vaccines rolling out things won’t be back to any kind of normal this year. We still face many challenges. Some game stores closed their doors permanently during this crisis, while others are operating at reduced capacity. Simply put, we aren’t selling as many print books through distribution as we did pre-Covid and it’s unclear when that trend might reverse. We’ve been adjusting to this in various ways, but it has impacted our schedule. Some planned projects were put on hold, others will be delivered in different formats or though different methods. It’s a juggling act and so far, we are getting by. If you’ve supported us this past year, thank you so much! Now let’s talk about what we’ve got planned for 2021. Rather than break this down by game line, I’m going to talk about the different approaches we’ll be taking to bring you games and fiction.

Some titles we will still release in our standard way, which means a PDF release followed by a traditional print job. These books then go to game stores, the book trade, and our online store. We’ve just recently released the Time Traveler’s Codex for Mutants & Masterminds. The next book to go to print will be Ships of the Expanse, along with a reprint of game’s rulebook. Later in the year you can expect to see Modern AGE Mastery, the Fantasy AGE Core Rulebook, Book of Fiends, and Envoys to the Mount, an epic campaign for the Blue Rose RPG. We also have our continuing line of fiction through Nisaba Press. Tales from the Mount is a fiction anthology that ties into Envoys to the Mount. Our latest novel is Sacred Band by Joseph D. Carriker.

Crowdfunding is nothing new for us and it’s a method we’ll continue to use in the future. Our next campaign will be for the Fifth Season RPG, based on N.K. Jemisin’s terrific novel trilogy. We also have several previous crowdfunding campaigns that are nearing completion. Q Workshop has manufactured The Expanse Dice Sets for us and they should be shipping over from Europe soon so we can begin fulfilment (Pre-order now for an Exclusive set of Protogen Dice before they’re gone!). The Book of Fiends—our gorgeous 5E monster books of demons, devils, and daemons—is in layout with art pouring in. Then Sentinels of Earth-Prime, a card game that combines the Sentinels of the Multiverse rules with our Mutants & Masterminds setting, is art complete and we’re sending it to print. All of these titles will be available through normal channels after the fact if you missed the crowdfunding campaigns.

I don’t know about you, but I’ve done a lot of online roleplaying during quarantine. While we have had Mutants & Masterminds available on Fantasy Grounds for years, we now have a team that’s working to bring more Green Ronin titles to various virtual tabletops, including Roll20, Fantasy Grounds, and Foundry. We’re now working on getting some of our AGE games, including The Expanse, up for play. We’ll also be doing things like token and map packs.

Now available in Print On Demand at DrivethruRPG!

Previously, we haven’t done much with print on demand books. In the early days I just didn’t think the quality was there, but this has improved vastly over where it was 10 years ago. We’re thus going to be offering more titles on DriveThruRPG with a print on demand option. Just last week we launched the Blue Rose Adventurer’s Guide, which brings our world of Aldea to the 5E rules, with both POD and PDF options. The Sword Chronicle RPG that we launched last year also now has a POD option.

Another new avenue we are exploring is Patreon. We just launched a Mutants & Masterminds Patreon so check that out if you are a fan. It’s proving a convenient way to bring some older characters back in the Third Edition rules. Right now, we are just a few patrons away from unlock even more exclusive content. Once we reach that milestone, we will be adding location write-ups, with the top-tier patrons being included as shop owners or NPC characters in new monthly releases. That would be in addition to the weekly character stat blocks we release every Monday. If M&M goes well, we may explore Patreons for other games as well. 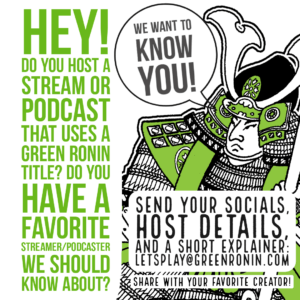 You may have noticed that we’ve been ramping up our online presence thanks to Troy, with things like Mutants & Masterminds Monday with Crystal Frasier and Steve Kenson and the new ThursdAGE with Owen Stephens. Expect to see more of that in the future. We’re also interested in hearing from you if you are streaming our games. Do you host a stream or podcast that uses a Green Ronin title? Do you have a favorite streamer/podcaster we should know about? Send those cast social details and a short explainer to letsplay@greenronin.com.

That’s the story for 2021. Hopefully, we can get through this year without rains of frogs or plagues of locusts or the like! If you enjoy what we do, please consider supporting any or all of what I’ve talked about today. We’d love to see more of you on the M&M Patreon, for example, or reading our Nisaba Press fiction. Right now, we also have two offers going on the Bundle of Holding, one for Dragon Age/Fantasy AGE and one for The Expanse/Modern AGE. Those are great deals on the PDFs if you want to check those games out.

Thanks for all your support! We sincerely appreciate it. Stay safe out there and we hope to see you at cons again in 2022.

A Wolfenmoot Gift
Scroll to top Skip to content