The past few months have been focused on the design and playtesting of the decks of Sentinels of Earth-Prime and I’m happy to report that it’s going great. The fourth version of the playtest decks are currently having their tires kicked and everything is coming together nicely. 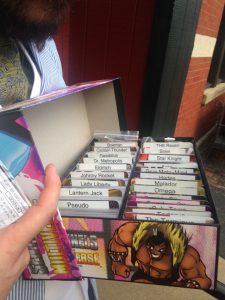 Earlier this month, both Green Ronin and Greater Than Games were at the Origins Game Fair in Columbus, Ohio and this gave us a chance to get together to talk about the business side of things and do a playtest together. 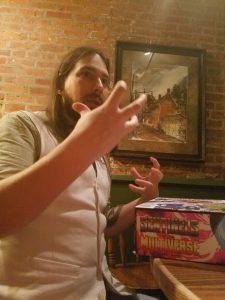 This was the first time we’ve actually had the whole team in one place so we were able to cover a lot of ground and make sure everything was on track for the next stage of development. In addition to the boss Ronins (Nicole, Hal, and myself), we had Steve Kenson (designer of Mutants & Masterminds and creator of Earth-Prime), James Dawsey (art director for this project), and Christopher Badell (Greater Than Games, designer of the Sentinels games).

The following day Christopher, James, and I met up for a playtest of Sentinels of Earth-Prime. 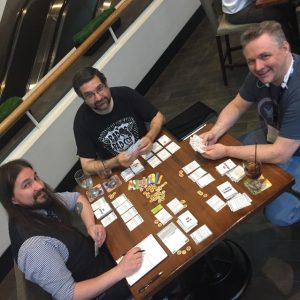 Playtest at the Big Bar on 2!

I played Lady Liberty, James played Dr. Metropolis, and Christopher played Lantern Jack in a battle against Argo the Ultimate Android in the heart of Freedom City! Argo has powers that mimic those of members of the Freedom League, so this was a challenging fight, particularly with none of our characters being big damage dealers. Nonetheless, we prevailed, saving Freedom City once again! 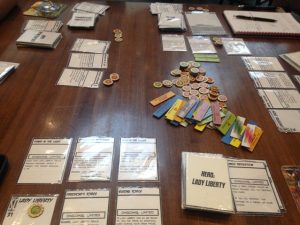 As Christopher designed literally every card of Sentinels of the Multiverse, I knew his new decks would be good. My primary concern was that they capture the right feel for the Earth-Prime characters. Back in April we had Steve go over the decks and give Christopher some notes on story and character. That and the continued playtesting have honed the characters so they provide a fun Sentinels experience and a great Earth-Prime experience as well.

At this point the major design work for the game is done, so it’s a matter of nips and tucks to ensure the decks are just right. We said previously that you could expect the game early next year and that is still the case. Right now we are in the lead up to GenCon, our biggest convention of the year, so things are in overdrive at GRHQ. Among other new releases, you’ll be able to get the Basic Hero’s Handbook for Mutants & Masterminds (check out Crystal Frasier’s recent Ronin Round Table to find out more about it).

Ronin Round Table: Maps of Aldis Preview
Scroll to top Skip to content