As some of you may already be aware, this is Blue Rose Adventure Week here at Green Ronin. We’ve decided to make some of our lines’ adventures available individually, starting with the six adventures that make up Six of Swords, the first Blue Rose adventure anthology, as well as Nightmare Rider, an adventure from Blue Rose’s first edition updated for the current Blue Rose AGE ruleset.

To help you find your way around these adventures, we’ve put together what we like to call our Map to Adventure! A map of Aldea with markers pinpointing the locations where our various adventures take place, with links to the pages for those adventures for easy ordering.

This way, you can check and see if there are any adventures that take place near where your own campaign occurs, in case you want to fold one of them into your narrative.

As we go on, we’ll be adding the locations of more adventures as well. In particular, the already-announced Six of Cups adventure anthology will likely be included on the map once we begin releasing those adventures. 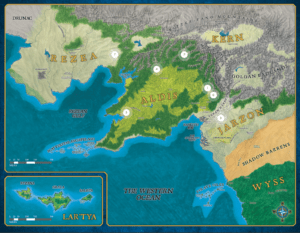 The Mistress of Gloamhale Manor: In the newly-settled Husqan Valley, children are disappearing. The heroes are called upon to investigate these disappearances, and all paths lead to the ancient Gloamhale Manor. What dark secrets await within? An adventure for 4 to 6 heroes of levels 1–4. (Editor’s note: A great introductory adventure for just .99!)

The Sixth Beast: The Trebutane fled the tyranny of Kern for the northerly reaches of the Pavin Weald. But now, they are prey to others: The bandits known as the Five Beast Army prey on the reclusive Trebutane. Can the heroes sent by the Crown uncover and resolve the deep conflicts at play here? An adventure for 4 to 6 heroes of levels 1–4.

The Night Market: The criminal Silence, so subtle within the Kingdom of the Blue Rose, occasionally hosts the Night Market, an auction of goods forbidden and illegal. Assigned to infiltrate a Night Market being held in the Veran Marsh, can the heroes successfully recover a shard of the sorcerous Shadow Heptagram? An adventure for 4 to 6 heroes of levels 3–5.

A Harvest of Masks: Though the Pavin Weald lies within Aldin borders, the deep forest is a world of its own. When folk in the villages along its border begin to disappear without trace or explanation, will the heroes brave its verdant mysteries to discover what is going on before it is too late? An adventure for 4 to 6 heroes of levels 5–8.

Storms Over Kamala: A Rezean witch seeks help to free the old wintering grounds of her lost clan from dark and sinister influences. When she approaches the heroes, will they journey to the horse-plains of Rezea to discover what wickedness lies in wait? An adventure for 4 to 6 heroes of levels 9–12.

A Wanton Curse: An autumnal gathering hosted by a borderland noble takes a turn for the tragic when an evil seeks to slake its thirst for blood and vengeance. Though the heroes were simply guests to the seasonal fete, can they rise to the occasion and help overcome the predator on the prowl? An adventure for 4 to 6 characters of levels 12–15.

Nightmare Rider: The marriage between the child of an influential Aldin family and the prince of a Rezean clan is an occasion worth celebrating! When the heroes are called upon to accompany the Aldin lady to her marriage bower in Rezea, can they protect her from the myriad threats that endanger the happiness of the new couple? An adventure for 4 to 6 1st level characters.

A Wanton Curse and Nightmare Rider will be available to purchase tomorrow, Friday the 24th of April.