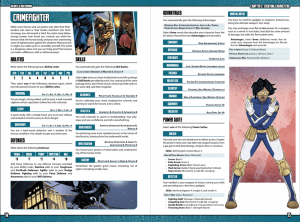 Morowa grew up in the nation of Dakana, a technologically advanced society hidden from the rest of the world. As a child, she always felt confident in her place in the world. With her clever mind and natural talent for athletics, she fit in perfectly as a member of the nation’s defense forces. As she advanced in school, she studied all the courses necessary for her to enter the all-female force comprising Dakana’s greatest defenders.

But her plans for the future derailed as Morowa began having strange dreams. At first, the dreams were  the same. She stood on the edge of a tall building, looking out over an unfamiliar city. It was night, and a moon shone brightly overhead. Below her, thousands of people went about their daily lives, unaware of her watchful presence. The city—like a heart—beat strong, but out beyond the heart poison crept through its veins.

Young and headstrong, she initially dismissed the dreams as a strange quirk of her mind. But the visions continued, and gradually Morowa found herself able to interact with them. She walked around the roof, glancing down from different angles and seeing slices of city life. She witnessed car accidents, assaults, and robberies, but she also saw good-hearted people stepping in to help when they could. And every time a good soul stepped in to help, the poison receded just a little.

Eventually, the young soldier began to notice a tiny spider crouched on the ledge. One night, as she descended again into the dream-city, the spider spoke to her.

“You are destined for more than a life of routine,” the spider said. “The heart you have trained your whole life to protect is strong; it drips with good souls and healthy blood. Your fate lies across the sea. You will help those who need it and strike down those who would harm the innocent. If you love the heart, how can you not love the body it feeds as well?”

After that, the dreams stopped. Morowa resisted, at first. She already had such a clear vision for her future, and it didn’t include traveling to another continent and living among the strange customs of the western world, with its crime and intolerance. But she couldn’t shake the spider’s words out of her head, and after discussing the matter with the shamans and soldiers, she decided to follow the path laid out by her dreams.

The first night in her new city, she dreamed again of the spider. “You have made a wise choice,” the spider said. “Fight with a fearless heart and trust those who come to your aid.”

Morowa fights with her acrobatic skills and with three weapons brought from her homeland. The most obvious are a collapsing staff and spider-shaped throwing disks, but the least obvious is the most deadly: a lifetime raised in a world uncorrupted by petty greed and hate, and the knowledge that such a place can exist where people flourish. Those who have fought her would also add Morowa’s sharp wit to her list of weapons. She calls herself Anansi, after the spider of folk-tales brought to Dakana from distant Ghana. She still knows little of the spider from her visions, but Morowa  knows who she is:  a trickster, and a spider whose bite draws out venom from the veins of the world.