So, here’s hoping the Expanse RPG Kickstarter burns just as hard at the end as it did in the beginning, because we have lot of momentum to shed before it all comes to an end at 9:00 pm Eastern Time on Wednesday, August 22nd.

That doesn’t leave a lot of time for you to back the Kickstarter, if you’ve been on the fence thus far. So I wanted to highlight some of the great things you can get, along with some of the discussion and previews of the game to-date, so you have all of the information you need to make your own decision (I think James Holden would want it that way). First, what you can get: 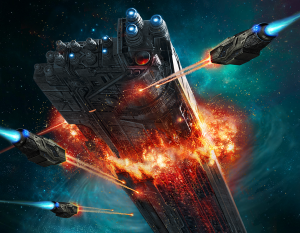 At the $30 Drop Ship reward level, you’re getting PDFs of the Expanse RPG core rulebook, the Game Master’s Kit Screen, GM’s Kit Adventure, Reference Cards, Pregenerated Characters, and the six-part Abzu’s Bounty adventure series. With the starter adventure now included in the core book, that’s eight adventures for your Expanse game (nine, if you count the free adventure included in the Quickstart).

At the $70 Destroyer level, you’re getting the Expanse RPG core book and Expanse Game Master’s Kit in print: A 224-page, full color hardcover book, lavishly illustrated with a fold-out map of the Solar System, plus the hardcover stock GM screen, reference cards, and adventure and pregenerated character booklet. Plus you get all of the PDFs, including the six-part Abzu’s Bounty adventure series.

At the $100 Battleship level, you get the special edition of The Expanse RPG core book, with beautiful black leatherette cover with silver solar system graphics and dust jacket, in addition to the printed GM’s Kit and all of the PDF content.

We’ve also unlocked an exciting new pledge level: At $1000, James S.A. Corey will write flash fiction about your Expanse character! Based on the info you send, Daniel and Ty will write a one page (200-300 word) “flash-fiction” piece about your character. These will be shared as a PDF with all backers who pledge $30 or more. In addition to the story, you get copies of the Special Edition and the Standard Edition of The Expanse RPG corebook, a bookplate signed by James S.A. Corey, the Expanse GM’s Kit, and all of the PDF rewards as well!

That’s what you can get (and there are other backer levels to mix-and-match, including levels for retailers), but you wonder “Tell me more about the game…?” Glad you asked!

First and foremost, you can check out the Expanse RPG Quickstart for free: a 40-page PDF that includes essential rules, pregenerated characters, and an adventure you can play right away to give you a taste of the new game. You can also get the Expanse Quickstart in print while supplies last.

You can also take a look at all of the Expanse Extra previews we’ve posted on the Kickstarter. These add to the basic rules in the Quickstart, giving you even more to play around with in your first game in terms of trying things out. They include:

Lastly, you can take a look at some of the media coverage The Expanse RPG has received. We’re incredibly appreciative of all of the excitement shown by fans of the series towards the forthcoming game!

Starships and Steel blog (news and analysis of the Expanse RPG)

The Expanse Is Getting a New RPG, Thanks to a Wildly Successful Kickstarter (io9)

The Expanse Is Being Turned Into an RPG (The Verge)

“The Expanse, Once a Homebrew Tabletop RPG, Is Going Legit” (Polygon)

Ronin Roundtable: The Expanse vs. Modern AGE by Malcolm Sheppard

It has certainly been a wild ride and we’re looking forward to passing the finish line and opening up the universe of The Expanse for countless new stories and adventures that you help to create!

Modern Monday: What’s Up? And Your Cool Idea From Gen Con
Scroll to top Skip to content