Modern Monday isn’t as frequent as it used to be, because Modern AGE is out! Buy it, play it, talk about it online. Today I’m going to talk about what’s happening with the game before finishing off with a cool idea put forth by multiple gamers at Gen Con.

(Want to dip your toes in first? Try the free Quickstart out.) 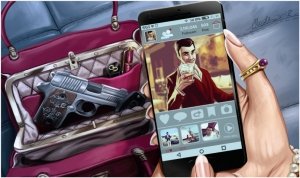 It’s out. Spread the word with your phone, not, uh, the other tool.

The Modern AGE Basic Rulebook is winging its way through distribution chains (and if you click on the link, you can get it straight from us, too). Preorders were on the march before distribution. We had this at Gen Con and it sold well enough that we had to order more halfway through the convention. I’m not sure how many we got altogether, but we went home with one box of ten. As developer, this lightened my heart.

We had advance copies of the Modern AGE Game Master’s Kit at Gen Con, and it should be following shortly. That’s the GM’s screen and reference cards. Being a middle-aged man, I found it weird when people bought this without getting the core, but of course someone explained to me that many of you had the game on PDF and wanted a hardcopy table reference. My beard visibly grayed in response.

The World of Lazarus is the first Modern AGE setting, based on the acclaimed comic series by Greg Rucka. It’s currently finishing layout. This is Crystal Frasier’s project, though I covered a modest chunk of writing. I love the comic and am looking forward to this. We expect this one to drop in a matter of weeks.

The Modern AGE Companion has fully edited text and art notes. It’s due to come out in early 2019. This is a counterpart to the Fantasy AGE Companion, in that it includes many new optional rules, including advanced talents, duels, horror, fantasy and SF backgrounds (like elves . . . and aliens), powers, technology, fighting styles—lots and lots of stuff. As it gets close to release I’ll preview some of its content.

We have a tentative plan for Modern AGE that covers future releases. As I’ve explained here and there, I usually only announce books when they’re text-complete, so this part’s going to be vague even though some of these are already in production. Note that anything on this list is subject to change, but it includes the following:

Like I said, things in this list are subject to change. I don’t lock things in until they’re close to completion.

Damn, I Wish I’d Thought of That: Shifting Mode

As mentioned, the Modern AGE Companion’s text is finalized. This is almost a pity, because I get new ideas all the time. However, there’s one thing I can’t take credit for, which three different people proposed at Gen Con: mode shifting.

Modern AGE has Gritty, Pulpy and Cinematic Modes to match your campaign’s style. These geniuses of Gen Con suggested being able to switch modes mid-campaign. This is a fantastic idea, meant to reflect things like the transition from a Gritty investigation to a Cinematic shootout. Of course, it can also be used to create games where, outside of set piece combat, characters can be effectively knocked out and captured. Here’s how I suggest you do it:

A Little Bit of Gratitude

Modern AGE seems to be a success. Before I go, I want to thank you for making it that way. Enjoy it, Play it. Talk about your campaigns. Have fun.

Ronin Round Table: Minions!
Scroll to top Skip to content