A World of Lazarus campaign doesn’t need to include a Lazarus as a player character, and in fact much of the book assumes the players are ordinary people trying to survive in this extraordinary world. The gamemaster’s chapter includes four general campaign models: Family, Serf, Waste, and Resistance, with the first three focusing on the various tiers of society that define the Lazarus setting and the fourth focusing on organizations like The Free who work to upend that stratification and restore basic human dignity to everyone. Each campaign model has its own player-character suggestions, objectives, adversaries, and nuances that can make for very different campaigns, and none require a Lazarus among the PCs’ numbers. For three of these campaign models—Serf, Waste, and Resistance—Lazari serve more as adversaries and boogeymen than heroes. 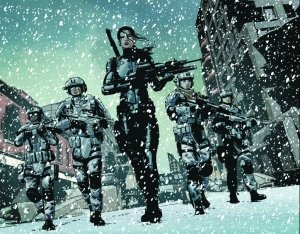 But we all like a power fantasy now and then, and World of Lazarus delivers with all the information you need to make player-character Lazari. But if every Family is only supposed to have one of these champions, how do you handle that at the table? Most roleplaying games are built around symmetric gameplay—the idea that player characters should be roughly the same power level. Fighters and wizards play differently, but if they start to feel too different, it feels unfair. Making asymmetric gameplay—where one player is more powerful than the others—work can be challenging, because you run the risk of one player being able to solve every problem, leaving the other players feeling useless and bored.

World of Lazarus describes several options for incorporating a Lazarus into your game, but the key is to design your adventures and opponents mindfully, making sure the Lazarus can’t do everything themselves and that there are challenges that showcase other players’ abilities. You wouldn’t design a fantasy adventure where every puzzle and every opponent could only be overcome by divine magic, and likewise you need to make sure you don’t build your Lazarus adventures in a way that every challenge is overcome by a Lazarus’s superior combat abilities. You may build combat encounters with one or two high-level threats the Lazarus must focus on, with other opponents that the non-Lazari party members can take out, or build your entire campaign with the intention of the Lazarus handling combat scenarios, but the focus including many scientific, investigation, or social challenges that the human party members can solve.

World of Lazarus details four ways of including a Lazarus as a prominent, permanent element in your own campaigns, which boil down to:

There are plenty of other ways to include a Lazarus in your game, from an occasional guest role to a cooperatively-played pseudo-PC to an NPCplot device the PCs can unleash as their secret weapon. The possibilities are limited by the deviousness of your own imagination. And you can always use the Lazarus talents to allow players to create half-measure Lazuri agents without applying the full Lazarus creation rules.

The Expanse RPG In ENWorld’s 10 Most Anticipated Tabletop RPGs of 201...
Scroll to top Skip to content