The Expanse Roleplaying Game takes the popular science fiction universe of The Expanse fiction series by James S.A. Corey (starting with the novel Leviathan Wakes) and brings it to tabletop gaming using the Adventure Game Engine or AGE System. You may well have heard about The Expanse RPG during our wonderfully successful Kickstarter, and may have even backed it then. In that case you have our thanks and the opportunity to check out a lot of existing previews. There’s also The Expanse Quickstart available to download for free. As the game will also be going into pre-orders soon, we’re going to preview a few more things to give you a look at what you can expect from it. 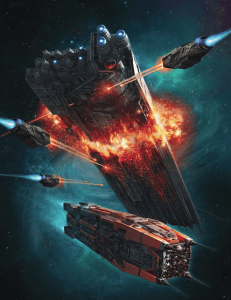 Combat between ships in The Expanse is similar in some regards to combat between characters, but on a much larger (and often slower) scale and more simultaneous in execution than character-scale combat.

At the start of each round of combat, the character in command of the ship makes a TN 11 Communication (Leadership) test. If successful, the commander generates 1 Stunt Point, plus additional SP equal to the value of the Drama Die, if the roll contains doubles, much like a Stunt Attack action.

Command Stunt Points may be spend on the following stunts:

These stunts are used by ships in space combat.