So the long awaited Faces of Thedas supplement for Dragon Age has just released and is available for print+pdf pre-orders. When I say “long awaited”, we ain’t kidding. From the fans to the writers to myself and the other folks at Green Ronin? We’ve been waiting for this book to come out for some time. 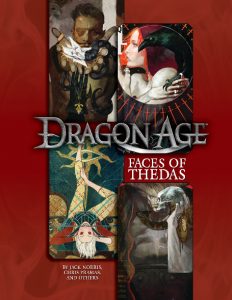 I’m not going to do dissection of the various delays and problems that led to the long development cycle. From tragedies to simple delays to approvals…it was a long road. But now that road is reaching its destination so let’s look at what that means.

Faces of Thedas is essentially a character archive/NPC cast book for Dragon Age. It doesn’t include every character in the games and novels, that was never really its purpose. Instead it takes various characters and organizations and provides additional information about them, including advice on how to play them, game statistics, and suggestions on how to use them in a game. These characters range from relatively minor but politically interesting characters like Yvette Montilyet to major players like Leliana and Cullen. Some characters are more likely to be plot movers and allies, others PC heroes will likely meet over a five course meal of swords, arrows, daggers, spells, and blood.

The book covers characters across all three games and various other media, which also means not ever character from a particular game, comic, book, etc… made the cut. This wasn’t due to some disregard for some fine characters who didn’t make it, there was just so much space and some other character for whatever reason was included instead.

What reasons? Honestly? I can’t tell you. Because there wasn’t just one. Some characters were deemed interesting, but their stories seemed more confined to a particular game, making them less likely to feature into tabletop campaigns. Others seemed to be statistically easy to replicate compared to another option, thus it was decided a character like Cole who didn’t follow normal character creation patterns would be more useful to model than someone like Lord Harrowmont, who for all his skill at intrigue and wonderful dwarf-y lordliness is mechanically a dwarf warrior who knows how to play politics. That’s nothing against all the Harrowmont fans out there, I like him too. However, I’m also confident most Dragon Age GMs wishing to use old Pyral can make a serviceable version of him for their games.

Speaking of Cole, here’s a preview of what he looks like in Faces. Note the background for playing incarnated spirits and the special Talent—these are the sorts of “extras” which sometimes pushed a character’s inclusion.

Also, we wanted to leave room for rules for relationships and organizations. The organizations in particular were important since they provide new honorifics and ranks, which are useful for GMs but also potentially for PCs as well. For example, want to know just how terrifying your Antivan Crow PC is to his potential targets in Thedas? We have that covered, as shown in this preview of assassin-based honorifics: 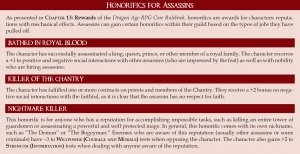 See? Now you its even easier to play your reformed killer drawn back into a John Wick* style rampage of righteous revenge in Thedas! These are the sorts of things Faces was meant to enable, not just a catalog of characters, but a guide to using those characters easily and effectively. Information on the Carta, Friends of Red Jenny, and other organizations was similarly aimed at helping players and GMs alike.

All told, there are dozens of characters and groups collectively in the group. This includes four new backgrounds and numerous titles and honorifics and rules for relationships. It’s a fine resource for Dragon Age tabletop players and fans of Thedas alike. We hope you enjoy it as much as we do!

*The Keanu Reeves films, not the game designer.