This week was supposed to be set aside for me to talk about the Modern AGE Companion a little more, but I want to talk about Alejandro (aka Alex, or Al-X) Melchor instead. Alex passed away last week, due to the extended complications of a stroke he suffered in March. 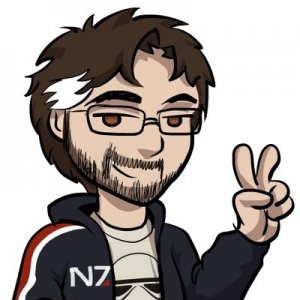 Alex worked on every Modern AGE book currently at any stage of completion. In the core, he wrote rules, focuses, talents and part of the extensive Game Master advice in that book. He brought his talents to the World of Lazarus, the Modern AGE Companion, and the upcoming Threefold and Enemies & Allies, too. I’m currently looking for writers for a new book. It has an Alex-shaped hole in it now.

I first got to know him through a semiprivate community we shared, in 2001. I’d just been invited, as responses to my early professional work for White Wolf had been good. Alex did some work for them as well before taking an intensive gig with Mongoose Publishing in the early 2000s. I drifted away and he was busy, though I knew him through the Open Game License credits I bumped into while designing my own stuff. In the interim he developed an enormous list of credits, tending toward mechanically intensive work. I’d say one great thing about him is he could work on rules that reinforce stories and atmosphere, because getting game systems down was quick work for him.

Steve Kenson got to know Alex well, and took the lead in doing what we could to help when he fell ill. He reintroduced me to Alex, and Alex became a bedrock contributor for Modern AGE. He did so much more, in his own communities, on other games, and with other creative people, but I don’t want to presume to talk about any of that. We worked hard. We made some good ideas playable together. And he was unfailingly nice to everyone, a born collaborator, but didn’t hesitate to point out what he thought would be bad ideas.

According to family and friends, Alex liked proactive, resourceful, tough woman protagonists. Modern AGE uses a loose set of iconic characters created by the writers. Alex created Indra Winchester, the technically-inclined punk, who you can see on the cover of the Modern AGE Companion and inside the books of the line. In examples, he’s her player. I plan to keep it that way.

It seems so inane to go through his qualities as a creative guy, when of course there was more, but he was my comrade in making games. That’s what I’ve got to work with, even though it’s not enough to give the man his due. He was a visual artist, and beloved by various communities. And more, always more. In and out of this industry, I won’t be missing him alone, and won’t be the only one feeling new gaps in what might be possible, in work and life. I’m going to miss him. 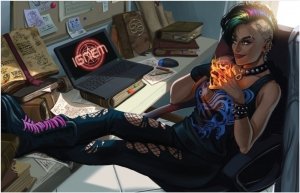 Modern AGE: From the Companion to Threefold
Scroll to top