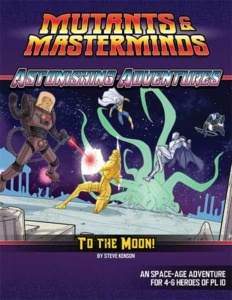 In the Star Trek: Deep Space Nine episode “Far Beyond the Stars” there is an imaginary sequence involving science fiction publishing in the 1950s. The magazine’s editor presents the cover for the next issue and asks which of the pool of writers wants to write a story to go with it. The genesis for “To the Moon!” this week’s Astonishing Adventure, reminded me of that. We had a piece of art, seen on the adventure’s cover, featuring Tesla Girl and some kind of formless green blob fighting heroes on the Moon. M&M developer Crystal Fraisier asked me if I wanted to write an adventure to go with it. Who am I to argue with the time-honored traditions of pulp publishing?

Naturally, I knew the adventure needed to involve: 1) Tesla Girl. 2) The Moon, and 3) Some kind of formless green blob-thing. What happened is pretty much summed-up in the adventure’s introduction:

“Sometimes life as a superhero means dealing with government corruption, making hard choices between right and wrong, and keeping the truth from your loved-ones for their own protection. Then there are those times when your day is all about fighting animal-people, tracking down some stolen super-monkeys, teleporting to the Moon, and stopping an unruly—albeit brilliant—little girl from unleashing an ancient alien slime-ball to eat an entire city full of people. This adventure is one of those times.”

“To the Moon” gave me the opportunity to revisit a few personal favorite bits of Earth-Prime setting: namely Farside City, the hidden human offshoot civilization on the far side of the Moon, and moon monkeys, those blue-furred teleporting scamps that first showed up with Chase Atom’s buddy Cosmo, an homage to Gleek, Blip, and all of the other great space monkeys of our time. Turns out they go great together with a precocious but anti-social girl genius with a fascination for steampunk and Victoriana. Of course, the heroes have a few challenges to overcome before they even come face-to-face with the main antagonist of the adventure. Although it wasn’t entirely planned, those challenges turned out to involve a lot of “wildlife,” especially sharks, for some reason.

The adventure was also a fun opportunity to come up with a way to make a particular foe an interesting challenge for a team of M&M superheroes in game terms. No spoilers here—you’ll have to read, or better yet, play, the adventure—but sufficient to say I’m pretty happy with it, and I think it plays well. Crystal even had me tone it down a bit, so thank her, heroes! If you do run or play in “To the Moon” I’ll be curious to hear how the finale of the adventure goes!

By my count, “To the Moon” is our fifteenth offering in the Astonishing Adventures line. If you were playing Mutants & Masterminds and completing an adventure every week, they could keep you busy for almost four months—and we have still more adventures to come! We just recently had an online meeting of the M&M “bullpen” to pitch and workshop adventure ideas, and there are some really fun ones warming up in the wings. Meanwhile, if any of this summary sounds intriguing, head right on over to the Green Ronin store and then … To the Moon!

Astonishing Adventures: To the Moon! Is currently available in both the Green Ronin Online Store, and on DrivethruRPG