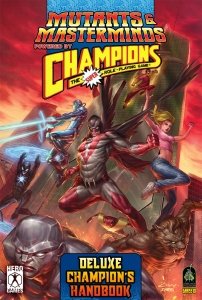 For far too long, we here at Green Ronin have stuck our head in the sand and focused entirely on the Mutants & Masterminds game engine, ignoring the many other superhero game systems that came before. And ultimately, that kind of myopia doesn’t benefit anyone but ourselves. Our fans deserve better. We’ve long partnered with Steve Kenson’s Adamant Entertainment to bring you Icons Superpowered Roleplaying, and so we have reached out to the creators of other amazing superhero game engines, both active and defunct, to begin the new Mutants & Masterminds System Upkeep, Collaboration, & Knowledge Exchange Roundtable. Our goal is to bring you the great Mutants & Masterminds products you love, for the systems you play!

Releasing at the end of this month is the new Mutants & Masterminds: Deluxe Champions Handbook, powered by classic Champions 3rd edition! Everything you need to play a Champions-powered Mutants & Masterminds campaign, complete with extensive point-buy systems our fans already love, plus tracking END to pay for your powers, sorting your attacks in Killing and Non-Killing, and many other elements that add a much-needed authenticity M&M has always lacked. A lot of you will ask “why not use Hero System, Sixth Edition or Champions Complete?” And that is an excellent question. One which I have no answer to. Licensing is a strange mistress and the rites must be observed.

We’ve been hard at work to fill out the System Upkeep, Collaboration, & Knowledge Exchange Roundtable line, and you’ll be seeing monthly releases to support it for the next year. After the release of the Mutants & Masterminds: Deluxe Champions Handbook this month, expect soon-to-be fan favorites like Freedom City powered by Villain & Vigilantes, Emerald City powered by Heroes Unlimited, and Rogues Gallery powered by Street Fighter the Storytelling Game!