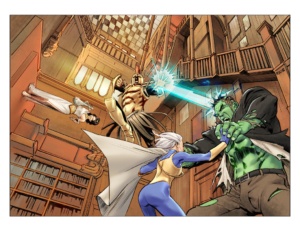 The next adventure in the NetherWar series, Assault on the Nerian Nexus, releases this morning. Following an unspecified number of years after the events in Master of Earth, Assault on the Nerian Nexus represents the first big event to kick off the villain’s diabolical plan to conquer not only Earth-Prime, but all the cosmos! The NetherWar begins with a bang, as Medea cracked open Adrian Eldrich’s now-vacant sanctum, the Nerian Nexus, to plunder the treasures inside! But secrets never stay secret among Freedom City’s villain community, and a half-dozen other villains wait in the wings to make their own run on the wealth and knowledge long protected inside the supernatural abode! The heroes will need all their strength and cunning to stand up against a rotating gallery of villains before they can escape with deadly secrets and powerful magic artifacts!

Adventure author John Polojac—who you might remember from Rogues Gallery and the SuperTeam Handbook — did a great job bringing the surreal world of the Nerian Nexus to life, with plenty of bizarre encounters beyond villain rumbles to vex and emotionally scar your heroes. John always overdelivers, and was thoughtful enough to provide some advice for Gamemasters who want to switch up the events of Assault on the Nerian Nexus for increased customization and replayability by adding an optional encounter with the villain Arcanix at the adventure’s conclusion. 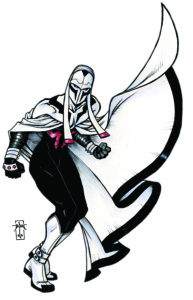 Having the far more self-interested Arcanix substitute for Warden in the conclusion sets up a potential confrontation for the heroes. While Arcanix desires the same prize as Medea—the multiversal guidebook Alternity Atlas—he realizes he arrived too late for that. But the mysterious mage will take a concession prize as his due, all the lesser items gathered by the Crime Leaguers on their sojourn. Heroes balking at this “compensation” must contest with Arcanix. The characters should justly be wary of giving over ANY of the Nerian Nexus’ prizes to the avaricious Arcanix.  While he has no genuine animus towards the team, he realizes they are unlikely to comply with his demands, so Arcanix will strike the instant any heroes voice objection!

Even if prevented from absconding with ill-gotten goods, Arcanix taking leave with Medea to parts unknown is obviously a bad idea. Should he escape with the immortal in tow, an adventure can be built around tracking Arcanix before he finds a way to add Medea’s secrets to his own. As memories cloud following his departure, the team must act quickly to discover a means of reaching Arcadian’s extra-dimensional bolthole!

The Arcanix Alternative takes the adventure’s conclusion in a very different direction, setting up a chase scene or rescue mission culminating in a confrontation with a power spellcaster. Depending on how the heroes handled other villains throughout the events of Assault on the Nerian Nexus, they may assist the heroes in freeing Medea or use the distraction as a moment to lash out for revenge! Tom Cypress in particular is likely to become involved to save his best friend, while Medea’s Crime League cohorts may likewise follow up on her kidnapping before they lose their only reliable access to magic power.

Arcanix’s statblock and background information can be found in the pages of Threat Report, alongside dozens of additional villains who might threaten your heroes!

The NetherWar doesn’t end with Assault on the Nerian Nexus, so stay tuned for further supernatural adventures!

Powered UP! A Mutants & Masterminds fiction Anthology
Scroll to top