Some of you were lucky enough to get the Free RPG Day Threefold Quickstart, and may have learned a bit about this, our first original Modern AGE setting. If not, you can learn a bit more by reading my last article about Threefold, written before the new Quickstart (which we’ll be able to make available to a wider audience in July) dropped.

But what’s in a name? Specifically, what’s in the name Threefold. This got attached to the project early, as a way of acknowledging the three elements I wanted to bind together: modern fantasy, contemporary horror, and near future, Singularity-sensitive SF. As we put it together, nothing else fit better, and in fact, it became even more suitable as we invented more of the Metacosm. 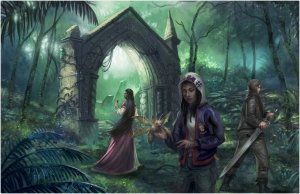 Three members of the Sodality, a branch of the Vitane, survey a new plane.

Gates connect most of Threefold’s innumerable planes, allowing passage for those initiated into the Metacosm’s nature. Each plan is unique, but an informed traveler knows they belong to three primary categories.

Earths: Earths consist of the primeline (which connects via gates to Otherworlds) and Alts, branched-off histories (also called worldlines) which rarely have gates, so that they must be reached through Earth via extraordinary technologies. Magic functions poorly on Earth, but natural laws work with such reliable potency that it is the birthplace of the most sophisticated feats of science and engineering. Beings of order and information called Machinors mind the many Earths.

Otherworlds: Otherworlds shimmer with kanna, the creative energy that makes magic possible. Things which are legends on Earth are very real in the Otherworlds, though every myth is inaccurate, incomplete, or out of date. Most of the “gods,” or Hierarchs, have been driven away or gone into hiding, and new societies have sprung from ancient kingdoms. High technology functions less reliably, but magic often replaces it.

Netherworlds: Where Earth’s humans might regard Otherworlds as realms of Golden Age legend, they’d see their Glooms, Infernos, and demonic incarnations in the Netherworlds. Alastor demon-monarchs rule each Netherworld; their personalities influence their domains, and vice versa. Rivers of green fire and bleeding trees are not unusual. Natural laws bend as if influenced by a sadistic intelligence.

Threefold takes place in the present, which is also the waning of the Third Age, which began at the end of the Fellwar: a prehistoric conflict for control of the Metacosm’s souls. Humans of all kinds, from the rough dreygur to the elemental huldra, defied gods and demon lords to bring peace. In that peace, three great powers arose, and now stand at the threshold of a new war, or perhaps some other, unexpected transformation. The powers are:

The Vitane: Risen from refugees of the Fellwar, the Vitane follow a doctrine called the Code of Wisdom which orients its society toward learning, democracy, and respect for the rights of numerous peoples, including the right to be left alone. The Vitane hides itself on worlds where planar travel isn’t common knowledge, including Earth. The Vitane has no true military, but its exploratory arm, the Sodality, includes fighting Protectors alongside its Emissaries and Searchers.

The Divine Empire: The end of the Fellwar threw most of the Hierarchs, the old god-rulers of the Otherworlds, into exile, but their children, the Optimate demigods, still felt they were due certain entitlements. Attempts to acquire these through Vitane democracy failed and eventually, many planes followed a splinter faction under Dyraza, self-proclaimed First (and only) Empress of the Divine Empire. Dyraza was slain by the Alastor, Avakim, and no successor has replaced her, but the Empire’s theocracy, where Optimates rule mortals across dozens of planes, abides.

The Nighthost: During the Fellwar, one host of soldiers commanded by the Netherworlds rebelled, inspiring others to do the same, until they became a mighty warrior society, the Nighthost. Nighthost warbands are raiders and warlords, who respect strength and relish a fair fight—or a properly framed unfair one. They’re a scourge of the planes, but greeted as liberators when they attack Netherworlds, and free their tortured inhabitants.

Okay, there is one more faction, but it’s not transplanar in the usual sense. The Peridexion is Earth’s secret government, under the rule of a collective of transcendental intelligences who monitor multiple spacetime continua. Allied with the Vitane, the Peridexion sends certain agents on missions with Vitane counterparts. We’ll talk more about these organizations next time. As for Threefold, we expect to have it at Gencon—watch for it!