The Expanse Roleplaying Game takes the popular science fiction universe of The Expanse fiction series by James S.A. Corey (starting with the novel Leviathan Wakes) and brings it to tabletop gaming using the Adventure Game Engine or AGE System. You may well have heard about The Expanse RPG during our wonderfully successful Kickstarter, and may have even backed it then. In that case you have our thanks and the opportunity to check out a lot of existing previews. There’s also The Expanse Quickstart available to download for free. Now that the game is also going into pre-orders, we’re going to preview a few more things to give you a look at what you can expect from it. 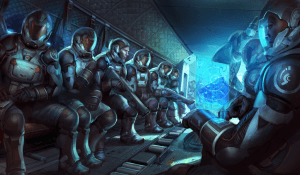 One of the most fearsome sights on the modern battlefield of the System is military power armor, like the Goliath suits worn by Martian Marines. Two and a half meters tall, and weighing 400 kilograms even before a soldier climbs inside, power armor provides both formidable offense and defense. Half armor and half spacesuit, the armor has radiation shielding sufficient to let soldiers walk through a nuclear bomb crater minutes after the blast. The armor’s titanium and ceramic-composite exterior shielding is typically painted in camouflage patterns appropriate to the assignment, and enemies are often surprised just how well an enormous soldier in power armor can blend into the environment when they stand still.

The armor’s hydraulics system magnifies the wearer’s strength, much like a mech rig, and carries most of the weight of the suit, allowing soldiers in power armor to undertake marathon hikes and move surprisingly fast. They also enable the armor carry heavy weaponry, typically a rotary machine gun and sometimes a grenade launcher or micr0-missile pack. Sensor packages feed data to the wearer on the helmet’s HUD, allowing them to identify and track infrared targeting lasers used by opponents’ weapons, and even visually parse those weapons using the suit’s camera feeds to match them against an internal database. Those same cameras monitor in all directions, sending feeds back to squad officers and their military command center, which can monitor the life signs of both the soldiers and opponents who have been detected and attacked.

If power armor loses power, it becomes massive deadweight, effectively leaving the wearer restrained and unable to use any of the armor’s systems.