In the world of Blue Rose, the Kingdom of Aldis is normally where it’s at, but our newest releases, Envoys to the Mount and Tales from the Mount, are instead taking us on a journey to a very different destination, indeed: the Shadow Barrens, sorcery-defiled remnants of the once-thriving realm of Faenaria, where stands the quasi-mythical Mount Oritaun.

Envoys to the Mount is a campaign sourcebook for Blue Rose, spanning levels 2 to 17, which challenges a band of the Sovereign’s Finest to embrace their Destiny and defy Fate on an errand of mercy with repercussions to be felt throughout all of Aldea, now and for ages to come. While the quest begins innocuously enough—rendering aid to people in need across the kingdom—the adventure will lead these envoys to uncover ancient arcane secrets, pursue (and be pursued by!) deadly enemies, walk the streets of a metropolis long ago lost to Shadow, and ultimately stand against the earthly champion of the Exarchs in a battle both for the future of a lost people and for the soul of the world.

However, Envoys to the Mount is so much more than just a campaign. It also serves as a guide to the Sovereign’s Finest, outlining organization, operations, ranks and responsibilities, and all the other information needed to understand the inner workings of this revered Aldin fellowship. Within, you’ll learn what’s expected of an envoy, as well as the privileges and obligations of those who ascend the rank, and both a brief history of the Finest and a “who’s who” of its current leadership. Further, Envoys to the Mount explores the terrifying Shadow Barrens in detail—its vistas and many hazards, along with various points of interest for the bold… or the foolhardy—and provides new mechanics for use in this or any other Blue Rose campaign, such as the corrupt Shadow Dancer Talent and the exciting new system for challenge tests (a kind of advanced test with the potential for consequences every step of the way). 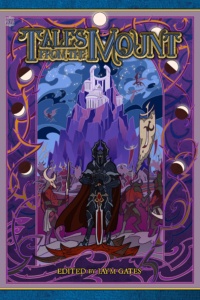 Of course, what’s a Blue Rose campaign without compelling player characters? Thus, we’re also releasing a free set of eight pregenerated 2nd level characters uniquely suited to the events of Envoys to the Mount, with built-in plot hooks intended to draw them directly into the action. While not necessary to enjoy Envoys to the Mount, these characters can jumpstart your adventure and get you right into the thick of things!

Last, but certainly not least, is Tales from the Mount, a nine-story anthology of nearly 300 pages of Blue Rose fiction centered upon the events, themes, moods, and settings of Envoys to the Mount. These stories shed a light on the dreaded Shadow Barrens and the terrible things that lurk within, through the exploits of those who defy Shadow with love and courage. Within its pages, you will accompany not just those braving the Barrens from without, but also travel alongside those from within that nightmarish land, to see that hope can bloom in even the most unlikely earth. Tales of bravery and sacrifice, of darkest sorcery and bittersweet triumph, await you!

What stories will you tell of Mount Oritaun?

The Sovereign’s Finest
Scroll to top