The Expanse Roleplaying Game, along with The Expanse Quickstart and GM’s Kit, are just the beginning of the game products for the popular sci-fi series. Green Ronin has more in the works, including two follow-up products that will round out and complete the stretch goals of the successful Kickstarter, and then some. Let’s peer into the future of The Expanse RPG with a look at those. 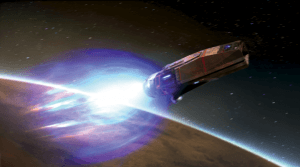 One stretch goal of The Expanse RPG Kickstarter was a campaign series of adventures to supplement adventure material in the core book, GM’s Kit, and Quickstart. That series is Abzu’s Bounty, a complete Expanse campaign with a linked series of six adventures. It is designed as a “starter” game, although it contains advice on moving from one or more of the already published adventures into the series, and has links to the background of the “To Sleep, Perchance to Dream” adventure from the core book. The player characters in Abzu’s Bounty go from relative nobodies to potentially deciding the future of the System by the end of the campaign.

No spoilers as to the plot, but Abzu’s Bounty ventures across the System, from the Outer to the Inner Planets and back, and includes a means of supplying the crew with a ship of their own. There is also plenty of Expanse-style skullduggery and intrigue along the way. By the end of the series, characters should be in the mid-level range, starting at 2nd and ending up 7th or 8th level, leaving plenty of room to grow as The Expanse RPG does.

Abzu’s Bounty is written and developed, and in the editing and art phase of production.

Ships of the Expanse

The other major stretch goal of the Kickstarter was deck plans for a number of ship classes from The Expanse setting. Those will feature as part of the forthcoming Ships of the Expanse sourcebook; backers will get downloads of all of the stretch goal deck plans, but the sourcebook will include those and much more. In particular, Ships will take the basic chapter on ship-building and in-game use of ships from the core rules and build upon it, offering expanded details, options, and ways of creating and using ships in your own game.

Plus there will be those deck plans and details, closer looks at even more types of ships found in The Expanse, what they look like and how they’re laid out. This will make Ships of the Expanse a popular book with fans of the series and gamers alike.

Ships of the Expanse is in the design phase, with authors just completing their first drafts, as it moves into development.

As players of The Expanse RPG know, the core book focuses on the period between the first two novels (Leviathan Wakes and Caliban’s War) with a lot of Expanse history waiting to unfold in the future. We’ve identified several distinct eras to Expanse game play, and the next one takes the setting and the series “further out” than ever before—far further than most of humanity ever imagined—once the protomolecule’s mysterious work on Venus is complete.

Nisaba Press Update: Height of the Storm!
Scroll to top Skip to content