Not too long ago I said I’d talk about Threefold’s speculative fantasy concept. What is it? While you can play any genre in this vast Modern AGE setting, we wanted to create a distinct default way to run the game. 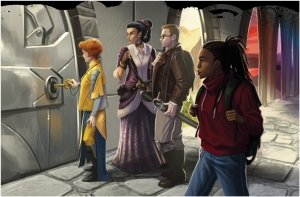 Speculative fantasy describes Threefold’s ability to ask, “What if?”—what if Earth were just one of many worlds? What if the multiverse theory was demonstrably true? Threefold explores experiences radically different from our own and encourages players to dig into a vast playground of discovery. It brings real world mythology and folklore to life, blending legends together and giving them unique twists to keep them fresh and alive with possibility.

The heart of a speculative fantasy scenario involves taking that “What if?” and making it the central problem of a scenario. Threefold creates speculative fantasy set pieces through its various planes and factions. For instance, in my current game, characters passed through a plane filled with ruins, where each scattered band of survivors thought the others, and any visitors, were the enemies who’d destroyed its former civilization. While my players were just passing through, they had to deal with this problem by making it clear they were newcomers. If they’d dug deeper, they’d have to figure out how to build trust between these communities and investigate where their perceptions of each other came from. Was it a psychic weapon? An ancient betrayal? Answering these questions and putting the information to use would resolve the conflict.

Threefold comes with an introductory adventure: “Identity,” by Jamie Wood. It’s meant to demonstrate this approach in action, as heroes untangle questions of rights and personhood. It’s the sort of scenario we often find in classic episodic science fiction. In some cases, this means you can use allegory to explore real world issues. Whether you do so, however, is entirely up to you.

One of the great things about speculative fantasy is that strange problems are often variations of normal ones, by allegory, as above, or through other extensions on more common stories. For example, Romeo and Juliet is a classic story, but it turns bigger and weirder when the lovers from rival houses are Optimates: aristocratic demigods who rule the Divine Empire. Not only must characters deal with superpowered relatives but ask themselves what it means in the context of the Empire, a tyranny reigning over multiple planes. Does healing the breach between two houses risk making the Empire harder to oppose? Can they persuade the lovers to rebel against the source of their own privilege?

Such dilemmas are part and parcel of speculative fantasy play. Should Aethon agents comply with requests to delete an alternate Earth developing apocalyptic weapons, if most of the population has no idea what’s going on? Who is most entitled to a geomantic place of power on Earth? If a god returns to rule their people, should characters stand by while the population rejects the fairer institutions they’ve built for themselves?

Of course, characters need ideological and moral stances to work from. This is why Threefold provides two factions with different belief systems for characters to work with, in agreement or defiance. The explorers of the Sodality represent idealism and have set policies about what their organization considers right and wrong. Aethon’s spies and paramilitary forces represent a more pragmatic point of view. In the end, of course Modern AGE character drives and personal beliefs decide the course of action.

Threefold is out now, for order in our store, at your local gaming establishment, or at DriveThruRPG. Chapter 9 digs into the speculative fantasy concept further, and of course this is just one facet of a very big setting. Later this year, we’ll provide further Modern AGE support with Enemies & Allies, a book of creatures, Non-Player Characters and guidance for making your own friends and foes. Enemies & Allies is suitable for all Modern AGE games, but was designed to not contradict Threefold, making it fully compatible with this flagship setting.

Until next time? Play well in any world you choose.

Threefold and the Future of Modern AGE
Scroll to top