Modern AGE had a pretty good 2019! Last year saw the release of the Modern AGE Companion, a big book of optional rules and supplementary advice; and Threefold, the second Modern AGE setting (after World of Lazarus) and the all-original flagship setting for the game. The licensed World of Lazarus setting got some additional coverage with Crystal Frasier’s rules expansions in the Lazarus: Risen comic. Threefold was introduced to Free RPG Day patrons in 2019 through our revised and expanded Quickstart—get it online here.

World of Lazarus and Threefold also both made it onto Diamond Comic Distributors’ Top 100 Games sales list for 2019. That was nice too.

But it’s a new year, and time for new books and more! Here’s a bit of a rundown on what’s coming for Modern AGE this year. 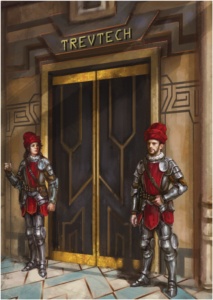 There’s a perfectly reasonable explanation for this in Warflower, the first Modern AGE Mission.

We plan to release these adventures quarterly starting with Warflower, an adventure we first used as a demo for Green Ronin’s Freebooters, which has since been revised and expanded.

Look for it and future Modern AGE Missions at DrivethruRPG or the Green Ronin Online Store, starting in March.

The next hardcover core release for Modern AGE is Enemies & Allies. If you’ve read my prior articles hyping this book that’s no surprise. Enemies & Allies is a book of friends, foes, and stranger beings for Modern AGE. Its five chapters cover entries from five different genres, from the prosaic (such as special agents, spies, and gangsters) to the fantastical (such as banshees and the Headless Horseman) to the bizarre (the memory-erasing Glawackus and the rage-inducing Experiment #12).

In addition to the entries themselves, the book includes optional rules to bind them to specific genres. Add Heat rules to determine how badly the law or the Mob wants to find characters or use psychic impressions to foreshadow horrors. We top things off with appendices about animals, NPC creation, and adapting creatures back and forth between Modern AGE, Fantasy AGE, and Blue Rose.

Five and Infinity is the first supplement for the multi-world Threefold setting. It’s a collection of five adventures, starting with two for low-level characters, followed by three higher level adventures with stakes ranging from the intimate to the epic. Hunt giant spiders on city streets. Foil psychic assassins. Hunt soul-thieves through dystopian alternate Earths. Gamble in in an industrial hell’s demon-run casino. And if you make it that far, stop the apocalypse.

In addition to the book’s adventures, Five and Infinity introduces the Infinity engine, a tool to generate adventures and planes of existence. The most challenging thing about running Threefold is coming up with new planes and adventures on the fly, and we hope the Infinity Engine helps GMs get it done.

Five and Infinity is scheduled for release in the second quarter of this year.

Game Master guides are a staple of RPG product lines, but the Modern AGE Mastery Guide is intended for players and GMs. This book presents a smorgasbord of new options interlaced with advice on how to play your character effectively, be part of a party of heroes, design your own adventures, and take advantage of Modern AGE’s specific characteristics.

In addition to giving you an advanced rundown on how the game works, this book introduces options for simplified characters, diceless play, new and custom equipment, freeform extraordinary powers, and quite a bit more. Combined with the Modern AGE Companion, this book should provide comprehensive options for customizing your game at the roots or on the fly. The book will also include developer-recommended rules changes devised after years of post-release play and testing.

Truth is, we have other Modern AGE projects on the go for this year and next, including new setting material and rules expansions. Watch this space!