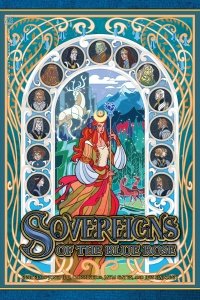 From the very founding of the kingdom of Aldis, its Sovereigns have been beacons of hope, catalysts for change, and exemplars of Aldin ideals to the best of their ability.

Anyone who has played a game of Blue Rose can’t miss the importance and impact of the setting’s Sovereigns, even if they never make an appearance in the game. These people have shaped the setting of Blue Rose over the years. They are directly responsible for making Aldis the egalitarian meritocracy that has made it so unique and interesting, both within the Blue Rose setting, and as a piece of fantasy fiction.

As such, it shouldn’t have been surprising when a fan of Blue Rose contacted me over social media, asking for resources on the previous Sovereigns. They were doing a fan art project, wanting to depict all of the Sovereigns, and had hit a brick wall with some of them.

So, I dove into the project myself, collecting and collating lore about the various Sovereigns. As I did so, it became increasingly obvious to me just how fascinating these characters were. My research included not just what they looked like, but also their deeds (for completion sake, of course). Reading through that list made me want to read more about them. It made me want to get to know them better, and that sparked an idea.

I approached Nisaba editor Jaym Gates with the idea, and she backed me immediately, facilitating the anthology, helping me to round up authors who would be perfect for the project, and generally championing me the entire way.

I also asked Jess Hartley to come in and help me with the editing proper – I’ve edited game books for nearly two decades, and written fiction, but I am still a baby editor when it comes to fiction, so I was very grateful for the experienced help.

Together, fourteen authors and three editors have made Sovereigns of the Blue Rose an anthology that is filled with deep Blue Rose lore, and an absolute love letter to the diverse, egalitarian, romantic fantasy roots of the world as a whole.

I’ve included the Table of Contents for the upcoming Sovereigns of the Blue Rose anthology, in addition to the cover. Welcome, and enjoy! 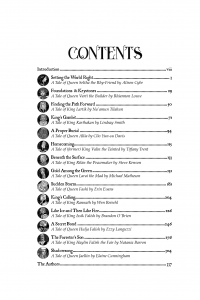