It is often remarked that The Expanse novels are “hard” science fiction. While this may or may not be the case, it is undoubtedly true that the science is an important aspect. However, what really makes these novels shine are the characters and the story. If you want to delve into whether The Expanse is “hard” sci-fi or not, you can find endless discussions on the internet, but I’m not here to debate that. Today, I’m here to talk about how we try to capture the balance of science and story in The Expanse RPG. 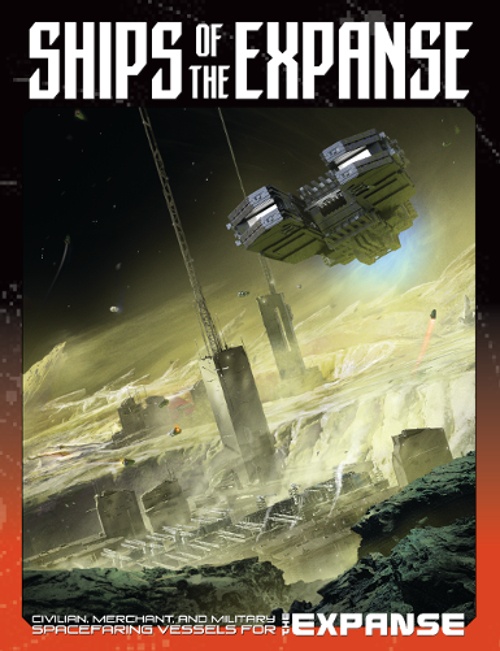 Enjoy this sneak-preview of the upcoming Ships of the Expanse book! Cover Art by Ben Zweifel!

Some sci-fi and modern setting RPGs spend a lot of time focusing on the science and the inner workings of every gun, gizmo, and gadget. Finding how much detail is “fun” in a roleplaying game is a difficult tight rope to walk. Too much detail and the GM and players can end up focusing too much on the gadgets and not enough on the characters; too little, and the setting may feel to generic. With The Expanse RPG, we chose to focus on characters and the story. We’ve tried to give enough details to provide a rich setting without getting bogged down in the nuts and bolts. We are content to say that a ship has an Epstein drive without worrying about exact type of Epstein drive or that a ship has full PDC coverage without worrying about the exact number of point defense cannons a ship has. Rather than define particular types of pistols, rifles, or torpedo bays and require players to check off boxes to track ammunition, we use rules such as the Stunt System for special maneuvers and The Churn as a means to inject the drama of running out of ammo or weapon malfunctions.

Ultimately, a roleplaying game is about character interaction – either with their environment or other characters and NPCs. Epstein drives, PDCs, plasma torpedoes, spin gravity, and all the bells and whistles are cool and add to the story, but in The Expanse RPG, they take a back seat to the story and drama. Personally, I think if you look closely at the novels, the authors of The Expanse do much the same. The ships, weapons, and gadgets give the story context and a platform on which to stand. But it is the characters and their actions and interactions that form the core of the story. The Expanse RPG is designed very much with that thought in mind.

Players and GMs who want to add more detail to their campaigns are certainly free to do so. It is easy enough to come up with particular types of weapons by basing them on 21st-century weapons and using the Item Qualities listed in the core rulebook to spec them out. You can even come up with ammo quantities if you want. The same applies to spaceships. Different engine types could grant small modifiers, and you can decide how many torpedoes and PDC bursts a given ship can fire. Later expansions, such as the upcoming Ships of the Expanse will also delve deeper into the details of the mechanics of space travel.

Recently Steve Kenson’s adventure “Salvage Op”, which some lucky fans may have had the opportunity to play during conventions over the last year, has been made available for purchase! Check it out in our online store, or on DrivethruRPG.

“Salvage Op is a short adventure for The Expanse Roleplaying Game intended for a crew of four to six 1st to 3rd level characters. The characters encounter a small ship floating dead in space. Salvaging the ship’s cargo could be an opportunity for riches, but what danger awaits onboard? What happened to the crew, and why is it here? This adventure works well as a one-shot or can be easily inserted into an existing campaign.”