Between last month’s new offering Rise of the Tyrant, and this week’s own The Reign of Cats and Dogs, the all new lineup of Astonishing Adventures is in full swing, with superhero action and adventure for your Mutants & Masterminds table. Rise of the Tyrant brought a sinister plot by an extradimensional warlord, using the puzzle-loving villain Conundrum as his pawn. Despite the high stakes, the encounters introduce new concepts one at a time, from combat to skill checks to investigations, making Rise of the Tyrant a great introduction to M&M for new players or players new to Third Edition. 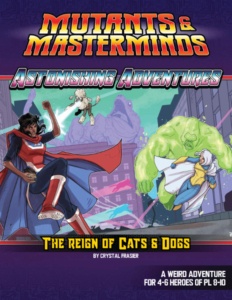 The Reign of Cats and Dogs is about as far, conceptually, from interdimensional conquest as we can get. The heroes must keep the peace and find a solution as the city’s animals begin developing super powers in one of the weirdest adventures we’ve ever offered for any edition of Mutants & Masterminds, making the adventure a fun fit for any superhero team, but especially appropriate for Hero High teens hoping to keep things calm.

But this isn’t the first appearance of The Reign of Cats and Dogs. The adventure began years ago as a homebrew convention game I ran for various events and based entirely off a bade pun from my good friend, author and DJ, Miranda Sparks. When I was double-booked during one GenCon event, I needed Green Ronin to send a relief GM halfway through my game: None other than Steve Kenson, who managed to pick up my notes with no prep time and run with them. He later admitted that reviewing my adventure notes for that game are part of what convinced him I would make a good fit for the Green Ronin team and M&M in particular, so The Reign of Cats And Dogs is actually responsible for my current position as head of my favorite game line!

We have plenty more Astonishing Adventures lined up over the next several months to keep you entertained and the city safe, running the gambit from wacky fun to deadly serious confrontations between good and evil! I don’t know if this bizarre escapade will bring you the same good fortune it’s brought me, but I know it’ll at least bring you a few hours of goofy fun, and I hope you enjoy it as much as my convention tables have!