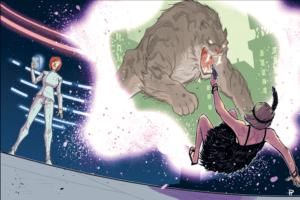 You flipped through the sacred text of the Time Traveler’s Codex  and now you think yourself an equal of the Chronomaster?! You thought your petty time travel shenanigans were any match for true villainy? I was weaned on chronal energy, with all the timestream as my playground. They think time is a realm for heroes? But villainy is relentless! Unyielding! Immortal! Your paltry acts of goodness are waves crashing against a beach, thinking they achieve something by sweeping sand into the tides and ever unaware that mountains stand beyond their reach.

Every era across space and time has its villains, from ruthless Gladiators of the Roman Empire to the Cyber Ronin prowling the neon kingdoms of the cyberpunk dystopia, I have eager minions ready to throw themselves in harm’s way. Even outside of time, loyal chronozoids—the Time Elemental, the Temporal Weaver, even the Chrono Predator—bend to my will!

But by now you’ve bested my minions. You think yourself safe. But I’m only just beginning. Can you face not one but SIX diabolical villains, gathered from the far-flung corners of the omniverse?! The Future Perfectionist, a diabolical mastermind who will use your own powers to shape the future to fit her ideal; the Immortal Conqueror, a master of the crudest form of time travel who has waged war since time immemorial; the Living Gateway, a fiend unmoored in the timestream, able to gallivant anywhere beyond the reach of your finite law; the Temporal Wizard, a master of chronomancy who bends past and future into potent weapons and reshapes his own body with evolutionary trickery; or the terrifying Time-Hopping Tyrant, a warlord evolved beyond human concerns and bedecked in technology far beyond your petty, 21st-century understanding! But first you must survive my personal pet—a silicon soul, forged with only a single purpose: to wipe you and your pathetic cause from the history books! Behold, the eXterminator!

THE TIME TRAVELER’S CODEX: ALL TIME, NO SPACE… (Ronin Roundtable)
Scroll to top