The shared world experience is an interesting one, something my earliest experiences with roleplaying games informed me about. After all, I started out playing around in imaginary worlds created by others, first as a hobby and later as a professional writer, so it’s a natural progression that now, other people are playing around in imaginary worlds that I created. One of the important things about shared worlds is that they’re like living things: They grow and change over time and, while you might help to create one, or even “raise” it, ultimately, it doesn’t belong to you and it can be better from a lot of different contributions. 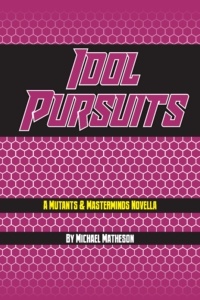 Idol Pursuits, the Mutants & Masterminds novella from Nisaba Press, written by Michael Matheson, is an example of how those diverse shared-world contributions come together. Like the upcoming NetherWar adventure series for the Mutants & Masterminds RPG, the story of Idol Pursuits has its origins in the update of the Freedom City sourcebook (itself the origin of the Earth-Prime setting) to the third edition of the M&M rules.

One of the background elements that was updated in Freedom City is a change in the forces of magic in the world: The loss of Adrian Eldritch as Master Mage, followed by his successor Seven inadvertently becoming ruler of the Netherworld, forced to exile herself from Earth. Now sinister forces of sorcery that were once under control are rising in power. One strand of that story is told in NetherWar (NetherWar: Master of Earth is on sale NOW!), while others appear in M&M fiction like Idol Pursuits and the forthcoming novel The Doom That Came to San Francisco.

When there’s magic at work in the world of Earth-Prime, you can bet things are going to happen in Mystery, New Hampshire, a mystic part of the setting I first detailed in Altas of Earth-Prime, which is also the setting for Idol Pursuits. Just the place where you might expect a deathless vigilante dealing out harsh justice might come across a strange idol that everyone seems to want, and team up with a young sorcerer-detective and his sword-wielding barbarian protector. For me, it’s a fun experience to see Matheson’s Revenant, Kid Necro, and Ilkath, among others, meet up with some familiar Freedom City characters of my creation, mixed with other contributions to Earth-Prime like Scott Bennie’s specialists in magic and weirdness from Agents of Freedom, and some of Prof. Christopher McGlothlin’s creepy characters from Freedom’s Most Wanted, to name a few.

Intrigued? Well, no spoilers here, but if you’re interested in magic and misadventure in the Mutants & Masterminds manner, and maybe getting another perspective on the Rise of Dark Magic in the Earth-Prime setting, take a look at Idol Pursuits, the ebook and pdf are available today from Nisaba Press!