Next week we are proud to release a collection of Mutants & Masterminds short stories from Nisaba Press, in an anthology entitled Powered Up! 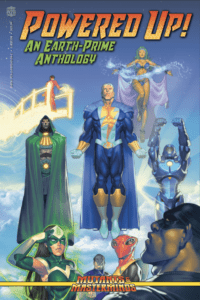 Time passes, some things change, and other things remain. If you could go back in time nineteen years, and tell me in 2001 that the characters I created for Freedom City (the first sourcebook for what has become the Earth-Prime setting) would still be around…well, I might well have done some things differently, knowing that, but overall I’m glad that I didn’t. Because time passes, and things change, and we and the world change with them.

Comic books are very much a shared medium. Even the great creators, who set the stage for generations to come, eventually passed the torch of the wondrous worlds and characters they created onto other creators, who have done the same, on and on for generations now. While not-yet twenty years is a small comparison to a publishing history easily four times that, I can look back to the earliest days of Mutants & Masterminds and Earth-Prime and the tremendous number of people who have contributed to it: writers, artists, editors, developers, and other creatives, as well as countless players and Gamemasters. They made what started out as “my” world into a truly shared world.

I was recently told by a reader that one of the things he liked about Earth-Prime is that we have allowed time to pass in the setting, largely as it has passed for us. Characters from almost twenty years ago have grown-up, retired, moved on, and even died. Young upstarts are now married with kids. Young kids are now young adults and the Earth of Freedom City has grown—oh, how it has grown! This book is just the latest chapter in that growth.

Powered Up is a whole different view of a living, changing, heroic world, because it is a collection of stories. For a tabletop roleplaying game like Mutants & Masterminds the stories need to be incomplete, unfinished: They are implied, hinted-at, or only half-told—offered as dangling threads you can pick up and follow, or briefly summarized histories of the epics of the past. They’re incomplete because they await players, the storytellers, to finish them.

This anthology lets us step inside those stories in a different way, not as players but as readers, and we can follow along with the heroes and people of Earth-Prime as their stories unfold before us. The diversity of stories in this collection shows just how rich and living a world Earth-Prime has become and, if I may indulge the role of “proud parent” for a moment, just how well it has grown-up over the years. I’m excited to be able to share these new stories with you, and looking forward to all of the stories—and changes—to come.