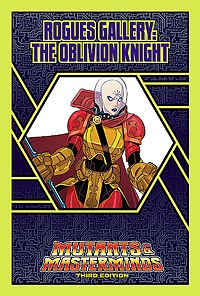 The Oblivion Knight is a zealous acolyte of Mistress Oblivion, an aspect of Entropy that’s also venerated by Omega and the Annihilists. She plans to remake Earth-Prime into the new Terminus throneworld through mystic corruption and targeted violence, rather than wholesale destruction.
Rogues Gallery … villains galore! Each Rogues Gallery entry includes a complete super-villain profile and character sheet with Mutants & Masterminds Third Edition game information. It also includes the villain’s background and various adventure hooks to use the character in your own game. Each entry is illustrated and, as a bonus, includes the villain’s game information in Hero Lab format, so you can import it right into the character management software and use it in your game (or modify it as needed) right away. Where else can you get a super-villain for less than the price of a cup of coffee? It’s positively criminal!