As it was based on the eponymous novel series, the first Chronicle System game, A Song of Ice and Fire Roleplaying, didn’t provide rules for the not-quite human characters that are staples of classic fantasy roleplaying games. We’re talking about elves, dwarves, and the like. As we were creating Sword Chronicle, a fantasy game that uses the Chronicle System but the setting of your choice (though we include one to start with), we knew this was an area we had to address, but not in the usual way.

First, the term “race,” traditionally used for these fantasy peoples back in the dawn of the hobby, had to go. I had personally abandoned the term in other work back in 2010, in a White Wolf project where I insisted on the use of “peoples.” In my role as Modern AGE developer I used “peoples,” as well, before settling into ancestries as the preferred term in the Threefold setting. Ancestries seems to be what Paizo’s Pathfinder opted for as well.

Second, many prior treatments of fantasy ancestries didn’t provide integrated support for characters with multiple ancestries, and characters whose culture wasn’t the one you’d expect them to inherit. What about a character with elf and dwarf parents, who grew up around humans?

In Sword Chronicle, the answer lies in character qualities, specifically benefits. At character creation, you gain two Ancestry benefits. The Sword Chronicle core rulebook supports dwarf, elf, human, and ogre characters. To indicate ancestry from one of these origins, take one of its corresponding benefits. If you’d like a character to have had all-elf ancestors, you’d choose two elven benefits, but for the example above, you’d choose one elf and one dwarf benefit. You may spend Destiny Points on further benefits, some of which may be easier to get for characters of the appropriate ancestry. As an example, let’s look at dwarves in Sword Chronicle. 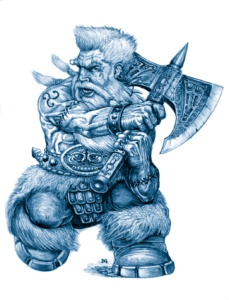 Dwarves are a hardy people who prefer to dwell in mountains and rocky hills, where they either dig their homes out of the rock, or mine the area for stone to build citadels. Mountain and citadel dwarves have different cultures, and sometimes, distinctive family talents. Most people of dwarven ancestry are hirsute, with many growing long beards. They’re shorter than most humans by a foot or two, but considerably broader.

Dwarven culture values artisanship and concrete achievements over social niceties. In settlements dominated by dwarven social mores, smiths, stoneworkers, and other artisans may be part of the nobility, and lords may even be asked to produce a masterwork in their trade to qualify for leadership. Dwarves may possess more sophisticated technologies than other peoples, but are notably less interested in the study of nature. Dwarven communities practice some agriculture, but usually prefer to trade for things that grow.

Blood of the Citadel

The legacy of the citadel dwarves flows through your veins.

Each time you make a Cunning roll to practice a trade involving working metal, stone or other solid minerals, or to identify the value and properties of anything made largely of metal or jewels, you may re-roll a number of 1s equal to your Awareness rank. Whenever you are attacked by fire or heat, increase your passive Endurance by 2. Finally, add +1B to Warfare rolls when attacking, defending, or fighting in fortifications.

You can swing axes with dreadful results.

Whenever you make a Fighting test to attack using an axe, you can sacrifice bonus dice before the test to deal additional damage. On a hit with the attack, your target takes extra damage equal to the number of bonus dice you sacrificed at the start of its next turn. This extra damage ignores AR.

The first benefit is exclusive to people of dwarven ancestry. Characters without it can’t acquire Blood of the Citadel. The second is a non-exclusive benefit. Other characters can gain Axe Fighter I, but can’t use their ancestry benefit choice (which doesn’t cost Destiny Points) and have to meet a higher prerequisite.

That’s how the system works, and how elves, dwarves, and ogres join humans as character options in Sword Chronicle.