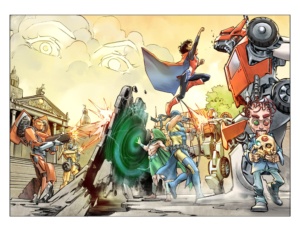 The newest installment of the Astonishing Adventures NetherWar series, Broken Strings, releases this week, taking your heroes across Freedom City to battle transforming robots and investigate a string of bizarre, toy-themed robberies. But what’s a magic-oriented series of adventures without a crawl through a traditional, fantasy-style dungeon? So Broken Strings eventually takes the heroes into a network of tunnels and prisons filled with traps, puzzles, and supernatural opponents itching for a fight!

If you’ve been following along with the NetherWar story, your heroes are in for a few revelations and some deeper mysteries, but even if you haven’t played the previous installments of the storyline, Broken Strings includes ideas for running it as a standalone adventure!

Mutants & Masterminds has a very different approach to character resources and scarcity—particularly health—than traditional fantasy roleplaying games. Heroes generally shrug off their injuries and conditions after every scene. Just like in comics, a superhero can take a thorough beating but be fine in time for their next encounter with a villain, and when an injury persists, that’s a temporary complication for which the hero earns a Hero Point. Meanwhile many fantasy RPGs limit characters’ access to health, class abilities, and equipment to add an element of resource management and risk assessment to each encounter. Fantasy RPG encounters like those in Fantasy AGE run a gamut of difficulties from trivial to deadly to slowly whittle away characters’ resources until they must rest, turn back, or perish. Superheroes on a dungeon crawl don’t capture the same mood as fantasy adventurers because they never need to track hit points, count arrows, or manage spells per day.

If you’d like to capture the spirit of dungeon-crawling fantasy adventure for Broken Strings or your own M&M adventures, consider to following optional adjustments:

Mutants & Masterminds generally only tracks the big, bombastic battles much like a comic book storyline might, with small, quick encounters relegated to background flavor and montages. But fantasy adventures rely on low-difficulty encounters to build tension and tax resources—a swarm of giant spiders might not present any genuine risk of death, but they still deplete your limited pool of health and possibly spells. To emulate this in M&M, sprinkle in an extra 4-5 encounters with less powerful opponents like Animals, Monsters, and Zombies from the Deluxe Gamemaster’s Guide and 1-2 encounters with less-potent villains like the Jobber or the Psycho. You can also borrow all sorts of classic fantasy monsters from the Super Powered Bestiary, available from Rogue Genius games. Consider interesting terrain for each encounter and how the villains or the heroes might use it to their advantage. Don’t forget about challenge sequences that you can use as traps, such as those presented in The Pentagram Peril.

Maps add an element of choice and exploration to a dungeon crawl, while Mutants & Masterminds focuses on dramatic scenes. The difference is showmanship vs. simulation. There’s no wrong answer for which you prefer, but each captures a different mood. If you want your players to struggle, suffer consequences for making wrong choices, and feel triumph for correct guesses, consider mapping the dungeon out and putting encounters at the ends of some dead ends. In this case, the heroes should have a few chances to learn some basic elements of the dungeon’s layout, such as the option of taking a dangerous shortcut or a longer path with more encounters, but less-challenging ones.

Mutants & Masterminds hand-waves most healing. Heroes recover one damage condition per minute of rest, meaning they effectively heal entirely between encounters and face each new opponent fresh as a daisy. If you want health and healing to be a more scarce resource, consider replacing the normal recovery rules with Vigor. Vigor provides heroes with a limited pool of recovery they must spend to heal in-between encounters.

Each hero gains a poor of Vigor equal to their Stamina plus their Presence, representing their physical toughness and their force of will. When not actively engaged in combat, a hero can rest for one minute and spend one point of Vigor to reduce the severity of a condition by one step (from Paralyzed to Immobile, for example) or to reduce their accumulated Toughness check penalty by 1. Heroes can still recover from obviously simply conditions (such as standing up from prone) without spending Vigor, with the pool more intended to reflect recovering from damage, resisting poison, and shaking off diseases; the Gamemaster is the final arbiter of what conditions do and don’t require spending a Vigor.

Heroes can only regain spent Vigor by resting for 8-10 hours somewhere safe. The Treatment skill can be used to diagnose illnesses, stabilize dying characters, can revive Dazed or Stunned characters, and provide a bonus against diseases and toxins, but doesn’t provide any direct healing. Powers like Healing and Regeneration provide one additional Vigor per rank and dictate how often a hero can spend Vigor. For example, a hero with Regeneration 5 has 5 additional Vigor and can spend a point of Vigor every other round to heal. Under these rules, Healing allows the healing character to spend their Vigor to heal another character.

Part of the risk in a dungeon crawl is that heroes don’t have the immediate ability to replace lost or broken gear or reach out to allies. Devices, and especially equipment, are vulnerabilities that the environment can exploit. Don’t underestimate the effectiveness of minor antagonists destroying a hero’s weapons or armor in an encounter with the Smash action, as collateral damage from a trap, or randomly as a complication (awarding the character a Hero Point). A hero should be able to repair a Device as part of an 8-10 hour rest. Equipment can’t be repaired or replaced, but a hero should be able to scavenge temporary replacements with effort and/or skill use, though it might not be as good as what they have been using—a hero who loses their armor, for example, can still benefit from borrowing a defeated foe’s leather jacket.

You can temporarily impose these rules to simulate the harsher nature of a magical “dungeon dimension,” or to reflect the time pressure and stress of a supervillain’s gauntlet-style “carnival of calamity,” but make sure to keep in touch with your players about any changes—even temporary ones—you want to make to the rules. Whatever the scenario, the goal is for everyone to have a good time and tell a fun story.

Tune in next month as the NetherWar heats up and serpent people step in to make things really complicated!