In the Dreaming Crown, a new world beckons, as its people step forth into the Metacosm. The inhabitants of Maldea have discovered gate travel. That classifies their society as Initiated, suitable for first contact with the Vitane, a peaceful government spanning many worlds. Through their explorers, the Sodality, you’ve been given the job of negotiating a friendly alliance. 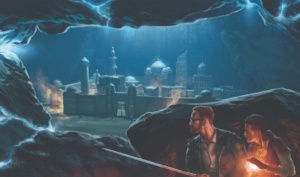 You’re not the only ones to welcome Maldeans to the glories of the planes, however, as representatives of the Divine Empire, a tyranny ruled by demigods, have also sent envoys to push a competing agenda—and to investigate rumors that a lost artifact, critical to the succession struggles of the Empire, has appeared on Maldea. The truth seems to lie in the dreams of the Afflicted, a Maldean social stratum both discriminated against and valued for their psychic gifts. And as the Afflicted see the Dreaming Crown in their visions, one among them knows the ancient secrets of their kind, and would make that dream a reality….

Dreams of Revolution and Fire

Written by Steve Kenson, The Dreaming Crown is the second chapter in the Five and Infinity series of Modern AGE adventures for the Threefold setting. Where Chapter 1: Hunting Night brought characters face to face with intruders from other planes on Earth, Chapter 2 brings them through the gates between worlds, to a new plane of existence.

While this is a standalone adventure for Modern AGE characters levels 1 to 4, it can also be run as part of the Five and Infinity series of adventures which take heroes from level 1 to 16.

Get Five and Infinity Chapter 2: The Dreaming Crown

…and generate your own adventures with Chapter 0