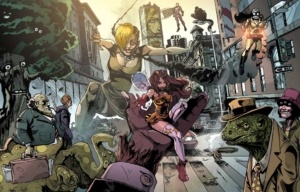 A lot of our Danger Zones offerings have been the kinds of locations you expect for superhero slugfests: the tottering Bridge , open Streets , the iconic Bank  for robberies, and Amusement Parks—both operating and abandoned—but there are a few offerings that don’t immediately spring to mind when you decide to plot of thrilling, comic-book action. A Fast Food Restaurant doesn’t seem like the best place to start hurling fireballs, and this week’s offering—the Convention Center—seems like a better place to buy comic books than reproduce their fight scenes.

But superhero adventures aren’t all about the expected. They’re about characters and where they get caught with their pants down. And superheroes spend as much time shoving burgers in their face or waiting to meet their favorite Star Battles actors as they do banking—especially in the 21st century. Danger Zones is about giving you interesting locations, not just expected ones. The convention center and the restaurant are both great locations for characters to be caught in their secret identities when things go south. But how do things go south in such mundane locations? Here are 20 random seeds for trouble breaking out when things seem calm:

Danger Zones: The Convention Center is available today in the Green Ronin Online Store, and on DrivethruRPG!

When the Developer Plays: Dueling Time!
Scroll to top Skip to content