As Mutants & Masterminds developer Crystal Frasier is demonstrating in previews leading up to pre-orders, The Basic Hero’s Handbook has a lot to offer both old and new players interested in the World’s Greatest Superhero RPG.

“But what about Gamemasters?” you ask. Fear not! As it happens, The Basic Hero’s Handbook (or M&M Basic for short) has a lot of offer M&M GM’s as well, including those of you who may want to start running your own games. What sorts of things will long-time and new Gamemasters find in the book?

M&M Basic provides several “encounter archetypes,” looking at a particular encounter or situation in some detail, including how to stage it, what the game mechanics look like, and different variations you can play out with it. The book includes encounter archetypes such as:

The Doom Room: How to run all of those “training exercise” scenes where the heroes cooperate against a fiendish simulation, or compete against each other. The material in this encounter also does double-duty in supplying game mechanics you can use for various villainous traps!

The Heist: The classic robbery scenario, including what the crooks are stealing, the potential for innocent bystanders in harm’s way, and ways the thieves may use to cover their escape when the heroes try to thwart their heist. Variations include how to mix-and-match some supervillains and different kinds of heists.

The Rescue: A falling jetliner, a runaway train, people in danger and heroes to the rescue! How to handle rescuing people endangered by these and similar problems, along with many variations that can turn them into even more complex encounters, such as rescuing a falling passenger jet while also dealing with the villains who damaged it!

Disaster! Looks at a different sort of rescue encounter, heroes saving people in danger from a catastrophe. This can range from a building on fire or damaged in a quake, to a storm or some other disaster, and sets up how to stage rescues and give the heroes challenges that are not necessarily things they can punch their way through.

You can use these encounter archetypes as building blocks for your own superheroic adventures or time-savers in your own adventure design, since the essential work has been laid out for you.

Ready to Use Villains

M&M Basic offers a set of ready-to-run villains with a variety of different power levels, from 8 to 15, complete with easy-to-read character sheets detailing just what the villain’s powers do in clear terms. For example, take a look at the new Luna Moth, a daring, flying thief with gossamer wings and chemical cocoons to challenge your heroes. 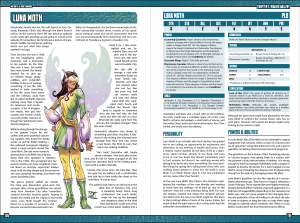 Other foes described in Basic terms for Gamemasters include the Power Corps, the Battle Brothers, the mentalist Mindfire, the space bounty hunter Loma Slife, Malador the Mystic, and the sinister Overshadow! Plus GMs get a variety of ready-made monsters and minions to round out the villains and to put between them and the heroes.

Shadows of the Past

Plus the Basic Hero’s Handbook includes a complete M&M adventure, Shadows of the Past, making use of the villains and encounter building blocks provided in the book. You can play through this adventure to introduce a group to the game or kick off a new M&M campaign, and use it as an example for building your own exciting adventures.

Combine this with GM advice and reference material and The Basic Hero’s Handbook has everything a group needs to get started playing the World’s Greatest Superhero RPG!

Aldis: City of the Blue Rose Pre-Order and PDF
Scroll to top Skip to content