This Ronin Rhydan Roundtable is inspired by a question from a Blue Rose fan regarding the events of the adventure “The Case of the Rhydan Swine” from the Aldis sourcebook. “If any animal in the world could potentially awaken as rhydan, how can people in Aldis eat animals?” 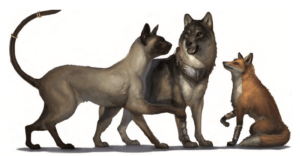 Not to be flip about it, but the answer is “carefully.” The existence of rhydan on Aldea (the world of Blue Rose) does mean quite a number of people are vegetarians, preferring not to eat animal flesh at all, and some are even vegans who do not consume any animal products. However, a great many people, even in Aldis, are still omnivores and do consume both domestic and game animals.

It is notable that, while it is theoretically possible for almost any animal to awaken as rhydan, that rhydan are quite rare to begin with. What’s more, the most widely known types of rhydan (bears, cats, dolphins, and wolves) are carnivores or omnivores, apart from rhy-horses, which are the most widely known type of herbivore rhydan. Other rhydan are even rarer, although they do show up in Blue Rose adventures and stories, simply because stories often focus on rarities or unusual characters.

In particular, domesticated animals almost never awaken as rhydan. They are the rarest of all. It is arguable whether or not the horse herds of Rezean count as “domesticated” since one could argue they domesticated the two-legged members of their herds rather than the other way around! Still, farm animals and pets awakening is largely the stuff of tall tales on Aldea. It isn’t impossible, but it is very unusual. That’s why it comes as a bit of shock in the Aldis adventure.

Since rhydan all have an innate ability to communicate psychically, those who raise animals do stay aware in case any of them should start “talking” to them! In fact, chances are Aldean farmers probably talk to their livestock even more than farmers in our world, just to see if any of them should talk back. Otherwise, it’s much like the situation of Wolf and Mandu on Kipo and the Age of Wonderbeasts: If you don’t want to get eaten, you had better speak up!

Likewise, many rhydan are carnivores—they have to eat other animals. Fortunately, as the upcoming Touching the Wild sourcebook details, rhydan have an innate ability to recognize on sight if another creature is rhydan, so predatory rhydan never accidentally prey on other rhydan, and rhydan prey animals have nothing to fear from their predatory “cousins,” just from ordinary predatory animals. Because of this, rhydan awakening from traditional prey species often seek out the company of two-legged folk, because it is safer than life in the wild.

Predatory rhydan have an easier time surviving on their own. People in rural and wilderness communities often rely on the aid of friendly rhydan as hunting companions. One advantage the Forest Folk of the Pavin Weald gain from their wolf-friends are fellow hunters who know exactly which prey are completely safe to cull from the forest. A rhydan predator corrupted by Shadow may eventually prey on fellow rhydan, or humanoids, which is a terrible combination of murder and “cannibalism” (of a sort) that horrifies all decent folk.

We look forward to detailing more about rhydan awakenings, life-experiences, and culture in the upcoming Touching the Wild sourcebook for Blue Rose.

Mayday! May Day!
Scroll to top Skip to content