Last time I talked about playing Modern AGE using the Threefold setting—and I mean, playing a character, not running a game, which you don’t see developers write about much—I started getting into a grab bag of insights. This time around though, we’ll be talking about how we’ve worked with Modern AGE and its supplemental rules and talents in our Threefold game. 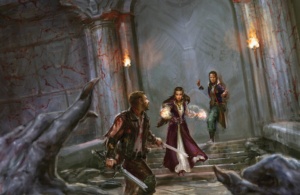 One house rule we use which will eventually be included in the finished but to be published Modern AGE Mastery Guide is the Boost stunt. Boost is a generic version of many other stunts which exists to help with leftover stunt points. Boosting costs 1-3 SP, which can be used for two functions:

Our GM, Steve (not Steve Kenson, but a local friend of mine) used an informal suggestion of mine that I’ve shared, here and there, and gave every character a free talent degree at Level 1, in addition to the talents Modern AGE characters normally get. This was so we could, if we were so inclined, lean further into our concepts, especially when it comes to Threefold-specific talents like Wandersoul or to gain posthuman augmentations by swapping out talent degrees. If you have campaign-specific talents, providing a bonus talent degree so they’re easier to take—even mandating the degree comes from one of these talents—is a decent idea.

Threefold assumes that psychic disciplines, as opposed to magical arcana, use the Power Fatigue option on p. 92 of the Modern AGE Basic Rulebook. This means that instead of drawing on a supernatural energy source measured in Power Points, characters make a Willpower test to avoid getting progressively exhausted from using their gifts. GM Steve noted that psychic powers already use Willpower for activation tests and decided that our psychic PCs should make Constitution tests instead, to maintain balance between attributes. Now personally, I don’t mind the Willpower-alone approach, as Willpower’s uses are sometimes limited, and it streamlines testing—you could roll both tests at the same time without much trouble. But this might be a good idea for a game with a heavy emphasis on psychic power that also uses power fatigue tests.

Multiple characters in our game took the Wandersoul talent. In Threefold, Wandersoul is intentionally highly effective at helping characters travel between planes, so it acts as an easy pick. It allows characters to sense gates between worlds and gives them knowledge of Shabda: Threefold’s universal language. Knowing Shabda is like having a conceptual “universal translator” in your brain so that you understand virtually any language so it’s extremely handy. But can you learn it without Wandersoul?

Tricky question. My original answer as Threefold’s creator was “no.” You needed to be a Wandersoul or Primal Being (a mystical creature bound to the Metacosm) to know it. But for playability’s sake I’ve backtracked on that. Currently characters in our game can learn it for one talent degree, but I think I’d like to eventually design an “official” answer that spreads out Shabda’s benefits as a dedicated talent and requires special (though attainable) circumstances to learn.

This series has caught up with the game to date, but I haven’t talked about everything I might say about it. Curious about playing Modern AGE with Threefold? Naturally, the best thing you can do is grab the books, but I’m also always willing to answer your questions. Cheers!

Dive Into the Aquarium for M&M
Scroll to top