Hey folks, Jack here. So with the release of the Fantasy AGE Companion I thought I’d tell you a bit more about the next book in the line.

Now I know some of you are probably thinking “Oh, man, the Companion took so long to come out so how long is this new book gonna take?”

Well, not nearly so long because its mostly written. Its not entirely written, there’s still some more to do on it, but the early drafts are in and looking good.

See, a few months ago I had an idea for a new book to round out the “core books” for Fantasy AGE and had some interested writers who either were not working on the Companion or had finished their work for it. So…I set them to work on this new book, the Campaign Builder’s Guide. 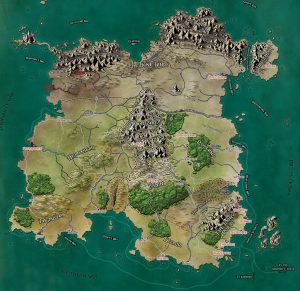 So what is it? Simply put, it’s a book about all the aspects of building your campaign. Each chapter covers a different topic, from encounter design to creating religions and pantheons to designing rewards and more. Each chapter is gives advice and a deep discussion of the process of designing and creating these aspects of a campaign. Then it finishes off each chapter with a detailed example of the campaign element using those guidelines and advice. So each section includes both ready to use campaign elements and guidance on how to make your own.

For example, one of our Fantasy AGE Bestiary contributors will be doing a chapter on adversary design. He’ll go through the process of creating a threat for your campaigns, the problems, pitfalls, and a few tricks you can use to really make your villains and monsters work well. Then at the end of the chapter he will present some all new monsters designed with that advice in mind.  Likewise, I’ll be writing on how to customize your game for various fantasy subgenres and then picking a genre and providing optional rules and adjustments to Fantasy AGE to make it better fit.  Each chapter will follow a similar format for different parts of a campaign. Also included will be a chapter of various random tables to help GMs generate locations, groups, and concepts on the fly.

This book is designed to be a GM’s guide in the sense it will guide GMs on how to do things for themselves more effectively and also present examples for their use.  The book will be released later this year and should round out our current lineup of core book, rules companion, and bestiary.

Ronin Roundtable: Back to Basics
Scroll to top Skip to content