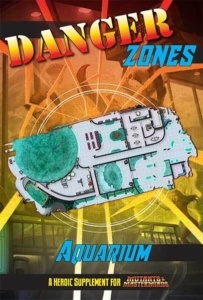 The release of Danger Zones: Aquarium is a bit of time travel on our side of things, because Aquarium was actually the first of the Danger Zones written, used as an example of how to set-up and write about the other locations planned for the series. It didn’t end up being the first one released, since M&M Developer Crystal Fraiser was able to take the time to further develop her initial sample map design for the setting, which is why our resident polymath has writing, design, cartography, and graphic design credits for the product!

Aquarium sets forth all of the essential elements that we have grown to know and love about Danger Zones: a summary and description of the setting itself, a practical look at the rules useful in using that setting, in this case things like water tanks, schools of flesh-eating fish, thermal shocks from plunges in icy water, underwater combat, and the inevitable exploding giant tanks of water (and the penguins, mustn’t forget about the penguins). It sets out the essential Cast section with archetypes (the Animal Trainer, Giant Octopus, and Great White Shark), along with a named supporting character (marine biologist Dr. Naname Anno), then it wraps up with a Capers section with three M&M adventure ideas featuring the setting.

Speaking of adventure ideas, it’s easy to borrow from popular media when it comes to making use of the Aquarium as a setting for your M&M adventures:

Trouble in the Tanks

Perhaps the aquarium has recently acquired an unusual starfish that is actually an alien creature or bio-engineered mutant with strange powers. The heroes are tipped-off by people disappearing in and around the aquarium. Of course, it doesn’t have to be a starfish. It could be an alien hexxim mistaken for an unusual Earthly sea-creature, or even a very angry goldish with tremendous mental powers. The relatively recent evacuation of Star Island off the coast of Freedom City (part of our “Summer of Starhaven,” over on the Mutants & Masterminds Patreon) sets up the possibility for certain alien beings or elements left behind in the ocean. 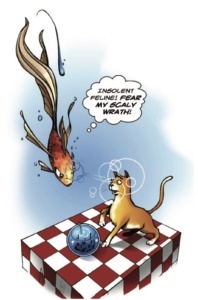 Are the characters fish (or penguins, or other sea creatures) dreaming that they are superheroes, or superheroes transformed into sea-creatures by a villain (such as the sorceress Medea) and left in the Aquarium to wallow in watery exile, only barely aware of their true nature, while the villains rampage unrestricted through their city? What if, in true comic book fashion, the transformed heroes are able to communicate with their fellow sea-creatures and get them to help stage a “prison break” so they can find a way to restore their true forms? Maybe someone like the sympathetic Dr. Anno may be able to help. They had best get on it before the moray eel (or shark) who is secretly loyal to the villain can cause trouble, or Aquarium personnel decide their behavior is too much trouble and have to release them back into the sea, or worse, feed them to the aforementioned shark…

Alternately, perhaps the aquarium is being used as a cover for some sinister operation by a supervillain or criminal organization. They have captured an Atlantean and are holding them for study (or possibly even for ransom). The Atlantean might even be a member of the royal House of Atlan, exerting some of their powers over water or sea-life to stir up strange incidents at the aquarium or the nearby ocean in order to draw attention to their plight. When the heroes investigate the strange goings-on, the villains decide to move their captive further inland, tipping their hand and giving the heroes the opportunity to intervene. They had best do so quickly, before the forces of Atlantis marshal to storm the surface world!