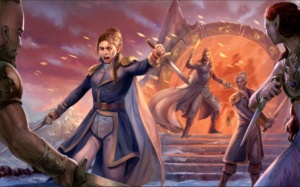 The existence of the Sovereign’s Finest in the nation of Aldis has, from the beginning, been almost entirely for the benefit of player characters. It exists to give player characters not just a reason to go out and do “adventurer” things, but to do so with royal approval and as national heroes.

Since this chronicle focuses on the players all as envoys of the Finest, we decided that we needed to spend some space talking about the Sovereign’s Finest. Not just how they fit into the setting (as the Blue Rose core rulebook does a fantastic job of doing). But what it is like to be an envoy. We take a look at ranking systems and roles within the Finest, introduce you to some of the movers and shakers among the envoys, and examine play at every level of the organization (as the organizational chart in this article suggests).

Moreover, we explore the mechanics of the Finest as well. New Specialties and Talents, unique items, new Titles, and even a system that puts player character envoys in charge of defensive structures, outposts, and other strongholds – all in the name of the Sovereign, of course.

This single appendix is chock full of information for players and Narrators alike for playing envoys of the Finest, and is sure to see lots of play at the table even after you have enjoyed the chronicle in the main part of the book.

Envoys to the Mount is available to Pre-Order right now! If you’d like to own both the print and PDF versions of the book, you’ll see an offer for the digital files at checkout for just $5! We’ll even throw in a copy of Tales from the Mount for just $5 as well! And don’t forget that we have a free PDF of 8 pre-gen characters for you to use if you’d like to get playing right away.

Be sure to check out our previous articles on the Ronin Rountable blog!
Designing a Envoys to the Mount
Mounting Anticipation

Boom with a Capital B – Rapid-Fire villains!
Scroll to top