Last time on SYWtPaDHTGfSR, I chose an article series title that did not lend itself to a catchy acronym. I also explained how you could, if you were somehow moved by some unlikely situation that made the idea of a dimension hopping trickster god exploring timelines —such as Loki, say, if we were to look at Norse mythology and I assure you, nothing else—part of the zeitgeist, how to make such a character for the Modern AGE roleplaying game, using the Modern AGE Basic Rulebook, the Modern AGE Companion, and the Threefold campaign setting. 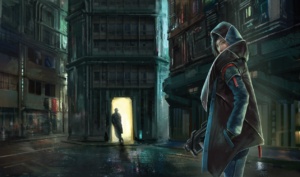 I didn’t just pick Threefold because of the character options, however. I chose it because if you want a dimension-hopping setting with an overarching theme to bind the infinite smorgasbord of varied realities, this is the setting to do it with. Threefold binds alternate worlds, fantasy realms, and hellish dimensions together in a common storyline. It’s so big, one of the main questions people have is, “How do I get started with so many options to choose from?”

Now we created the Five and Infinity adventure series to help answer this, but we also set it up in the setting book itself, by presenting two organizations that regularly travel the Metacosm—that’s Threefold’s term for the set of all universes. And I think one of them would be especially appropriate for those of you interested in the SYWtPaDHTGfSR play style: Aethon, the guardians of Earths various timelines and branches.

Aethon works out of a secret, super-scientific installation in Invindara, an obscure island nation between southern India and Madagascar, in the “primeline,” which is its term for the universe it prefers to cultivate. Parallel standard universes are typically defined by the presence of Earth. In the generally accepted tracking code use for other dimensions, it’s listed as EU-00004. E is “Earth.” U is “Uninitiated,” meaning most of its inhabitants don’t know about the existence of other universes. The number is the order in which it was logged compared to other dimensions. Yes, it’s a 4. Yes, you should get the book to find out why.

This gives your rebellious, adventure-prone trickster god a huge set of possibilities indeed, and that’s before you, say, make them a rhy-alligator by hacking in the rules for Blue Rose. When the GM goes that route, it’s better if you don’t question it.

When the Developer Plays: Let Me Tell You About My Character!
Scroll to top