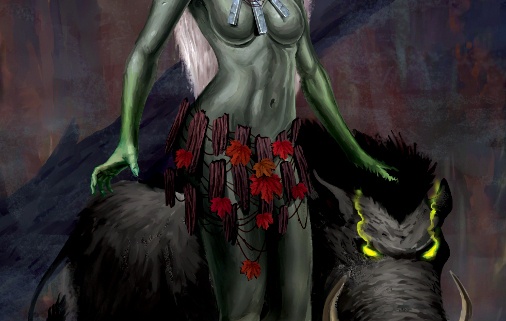 Fantasy AGE Trojan War, out now (and at DriveThruRPG) is a condensed guide to running Fantasy AGE adventures in the Homeric Age, a mythic-historical period where ancient events inspired grand myths. The events around Troy can be thought of as one of the first popular fantasy series and shared universes, though to ancient Greeks and people who feel deeply connected to it today, they also represent the founding stories of a people. But let’s step back from profound musings to ask: How do I run adventures in it? The Trojan War has different participants, rewards, and challenges than mainstream fantasy RPG adventures, but that doesn’t mean you can’t convert various adventures to fit the period. Let’s get into tips on how to do just that. 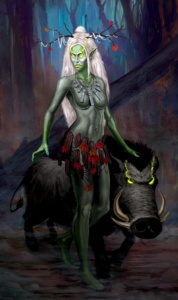 “The “tainted fey” Mallorsa should be framed as a renegade Nymph, corrupted by the valley.”

It’s common sense but needs to be said: Frame everything within Greek mythology! That means looking to the gods, titans, heroes, and their struggles for the origins of everything you use. Since Greek mythology is so influential, this often requires less effort than you might think. Monsters are the children or creations of immortals, or spring from their shed blood. Dungeons are the ruins of fallen heroes, secret temples, or built to house accursed creatures.

The Trojan War Isn’t All About Troy

As we note in Fantasy AGE Trojan War, it takes years for the Achaeans just to get to Troy, and they face plenty of challenges on the way. The Achaeans attack multiple islands, and raid Troy’s allies in Asia Minor, so there’s much more to do than simply make another run at the walls of Troy. Any island or rival kingdom can send an enemy force, rouse a divinely created enemy, or own a fortress that must be taken to reach a greater military objective. On the Trojan side, adventurers can ride out to aid allies against the Achaeans, or seek their help—and of course, these friends will want help in return, to retake land and fortifications seized by the Achaeans.

The Trojan War is ultimately about heroes, and how the gods love or hate them, and meddle with their destinies. In Greek myths, heroes are not necessarily good or bad, but possess forms of excellence tied to their ultimate fates that attract the notice of the gods. Sometimes heroes act monstrously and can easily replace actual monsters. For example, when the Telamonian Ajax ravages Thrace, he even kills their animals, in a foreshadowing of the madness that would eventually seal his fate. With a small detachment of spear carriers, Ajax, a ruthless, spoils-hoarding killer, can fill the same role in an adventure as a dragon.

Monsters Sometimes, As a Divine Treat

Of course, in addition to using heroes as monsters, you can use, uh monster as monsters. In a Trojan War campaign, monsters are usually related to immortals such as gods and titans. In most cases, only the intelligent offspring of immortals are truly immortal, and even lesser immortals can be defeated, as they lack true divinity and access to the nectar and ambrosia the gods use to maintain their endless health. Animal and bestial creatures usually have an even more limited form of immortality, which is why killing the cattle of Helios is possible, but still a terrible idea. Other monsters are the result of divine curses. The Greeks created monsters as part of their stories, and when you create new stories, you can use them to justify monsters from other fantasy worlds, giving them an origin fitting the Homeric Age.

As an example of converting a mainstream fantasy scenario, let’s look at Valley of the Whispering Titans from Fantasy AGE Lairs. First step: Rename the valley! That’s because while titans come from Greek mythology, the ones in this scenario left behind their skulls, which the immortal titans wouldn’t do. Instead, make the lair a remnant of the war between the Olympian gods and the giants. In fact, we can say that this is a place where Uranus’ blood fell, giving birth to giants and numerous other twisted creations.

The valley is the lair of a corrupt druid—except there are no druids in the Homeric Age (at least, none near Troy) so instead we should make main antagonist Callem Ressmil a pharmakeus: a sorcerer who manipulates divine power without the leave of the gods, as detailed in Fantasy AGE Trojan War. He’s probably a hero with an immortal ancestor who committed an act of hubris by claiming the valley and harvesting its power.

The “tainted fey” Mallorsa should be framed as a renegade Nymph, corrupted by the valley. The Valley Huntsman requires the most changes, turning from a corpse possessing ghost (Hades usually prevents that sort of thing) to a phenomenon specific to the valley, where the blood of Uranus animates dead creatures to face the characters once again—perhaps under the control of the resident witch. The Hanging Vine is another creature made or changed by Uranus’ blood. The “titans’ skulls” should belong to giants but can be used as-is; Greek myths include stories of the Aegis, made from a fallen monster, and it is fitting that other semi-immortal remains should retain special powers.

Plus of course, you need to change the names!

You can set the valley in an obscure peninsula or large island if this challenge is for Achaean heroes, or within the territory of Troy but outside the city for heroes from all sides. Apollo may demand the Trojans do something about the cursed valley before helping them. Artemis may be offended by the phenomena in the valley, and demand the Achaeans deal with it, since they already offended her on the way to Troy.

Ships of the Expanse – Welcome Aboard
Scroll to top