As I’m finishing up the last round of edits for the very large A Song of Ice and Fire Roleplaying adventure series titled Dragon’s Hoard, I thought I’d talk a little about our playtesters.

In an ideal world in which tabletop roleplaying games were one of those massively financed entertainment industries, we’d have a crack team of paid testers whose day job is to pick apart the stuff we write and improve on it. Having worked in the video game industry before, I can say it was always kind of great to be able to shoot one of the testers an email, ask them to kick the tires on the latest build and get immediate feedback.

The reality of our industry, of course, is that we don’t quite have the ability to maintain something like that. We’re lucky, though, in that our industry has a consumer base that’s filled with people who love being part of the process, as well as getting the chance to see some of the material that’s coming out for their favorite game ahead of schedule. Hence, our playtesters!

The playtesters for A Song of Ice and Fire Roleplaying are a pretty diverse lot, with folks in the United States, Canada, Europe, and Australia. They’re not just individuals—when I put my playtesting cadre together, I solicited for entire groups of playtesters. Which of course only makes sense: playtesters aren’t just beta readers, but are people who will take the rules that they’re given and put them through the process of actual game play.

Playtesters look for a couple of things. Rules solidity is of course a big one. We need to make sure the rules we’re using are on-target, whether newly created rules that need to be balanced against the rest of the system, or just making sure we’re using our already-existing rule-set consistently.

But playtesters do more than that: they also play through the material to make sure it’s actually enjoyable to play. At the end of the day, we’re creating games for people to enjoy, and that’s the first and last litmus test of our creative process: Is This Fun? Everything else is secondary to that.

Each playtesting group has its own personality, which is fantastic. Some groups are more interested in consistency of material to the book canon, for instance, while others are very strict rules people. Frankly, having this kind of diversity of gaming interest is to our benefit, and we’re grateful to these volunteers for the work and passion they put into these games.

If you and your group are interested in becoming playtesters, feel free to
drop me a line. It’s a simple process, involving the signing of a Non-Disclosure Agreement, and a little conversation between us. We’ve got plenty of really great upcoming material that’ll need its tires kicked, so if that sounds interesting, drop me a line! I’d love to hear from you. 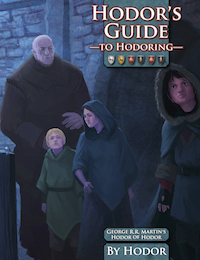 It came down to the wire, but we were just able to finish up the latest product for A Song of Ice and Fire Roleplaying: Hodor’s Guide to Hodoring. We’ve been working on this for a long time and we think you’re going to appreciate the usefulness and depth of this book. Best of all? It’s free and you can download it now. Hodor!