Longtime fans and frustrated newcomers alike have probably noticed that the Mutants & Masterminds Gamemaster’s Guide has been out of print for most of this year. Why retire such a critical rulebook for one of our most popular lines? Well, we didn’t. The original Gamemaster’s Guide was involved in a terrible test-pilot crash, and so we retrieved it and took it back to base, where we rebuilt it better than ever! 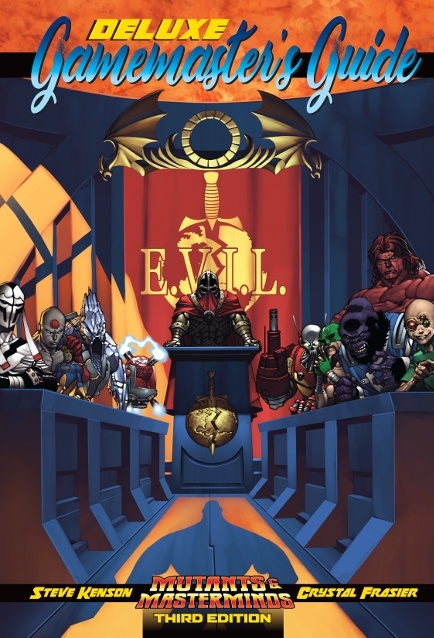 The Deluxe Gamemaster’s Guide has all the material you love from the original but expanded with even more content and bound in a sturdy hardback to better stand up to table wear. So what’s new? Let’s take a look at the updated table of contents:

That’s 70 new pages of content! Let’s take a look at part of that today!

The Archetypes chapter has been expanded to add new villains and new minions! One of the best parts of running a superhero RPG is getting to put your favorite tropes and sacred cows into the game, and I always thought the villain archetype needed a little more weird. The new villains include the Composite—a villain made from small particles or creatures, making them flexible and tough to hurt. But my personal favorite addition is the PL 8 Jobber, the second-string loser whose powers have a theme but don’t quite match the PCs’. These are your Shockers, your Condiment Kings, your Captains Boomerang. They’re great support; backed by a ton of minions or assisting a bigger villain, they’ll make you sweat. But on their own, they don’t stand much of a chance against PL 10 heroes.

I love the Jobber so much, I want everyone to have her! So here she is for everyone to enjoy!

The archetypes chapter also includes lots of new minions to help round out your adventure lineup. The big goal was to add some more unusual minion opponents and round out that PL7-8 “Lieutenant” range, so here’s the list of new additions: Devouring Swarm, Trickster Faerie, Jinx Faerie, Arcane Cultist, Mystic Ninja, Drone, Robot Jockey, Tulpa, and my personal favorite and noteworthy missing pet: the Hyena. The Deluxe Gamemaster’s Guide also includes a new section just for templates, with seven sample templates to let you adapt the preceding minions for your own stranger capers.

Part of being a superhero means being responsible in both deed and language. Words can have power, carry unexpected baggage, or be hurtful, and even when you don’t mean to cause harm, they can still have consequence. The original printing of the Gamemaster’s Guide included some word choices that are common comic book tropes, but also carry some real-world baggage. So we’ve changed a few names in the archetype chapter. These revisions use the same statblocks, but the shift can be confusing if you’re using adventures or villain write-ups that refer to these minions by name, so here’s the rundown on what got changed:

The Savage villain archetype is now the Hybrid.

The Thug is now the Crook.

The Hit-Man is now the Hired Killer.

And the minion-level Crime Lord is now the Boss. This wasn’t a sensitivity issue; we’re just trying to avoid confusion with the villain archetype of the same name.

Shadowtide: Recipes from Aldea!
Scroll to top Skip to content