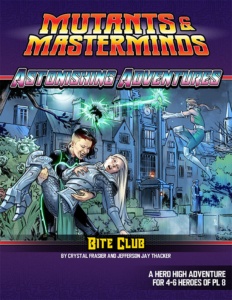 High school – so many of us couldn’t wait to escape it, and yet, it’s one of the most popular settings for superhero adventures. Perhaps because the alienation and angst felt by a lot of teenagers matches up so well with the secret identities and soap-opera melodrama of comic books, or because the teens who were “art nerds” and “theater kids” in high school later go into creating comic books…and, ahem, roleplaying games.

Whatever the case, maybe the only thing better than the genre blend of high school and heroes is to add a dark touch of horror to the mix! Bite Club, the newest release for the Astonishing Adventures series, does just that, offering a perfect Mutants & Masterminds adventure for your Halloween happenings! The adventure is designed for a group of teen heroes attending the Claremont Academy, a secret school for the super-powered in Freedom City, but you can run Bite Club with other types of heroes as well, perhaps visitors to the campus, concerned mentors, or guest-teachers.

If you don’t have a regular Hero High game featuring teen heroes, it also makes for a fun change-of-pace adventure for your Halloween holiday: Have your players put together a group of power level 8 heroes, or grab the Next-Gen characters from the Hero High sourcebook, and they can play a session where they see the challenges faced by the teen set, where the stakes aren’t as high as saving the world, but may involve mending a broken heart or two—and speaking of stakes and hearts, we don’t want to give away too much about the adventure itself, but you can probably guess…

Bite Club is available in the Green Ronin Online Store, and on DrivethruRPG!